Muc-Off Honda sixth in round one in Houston 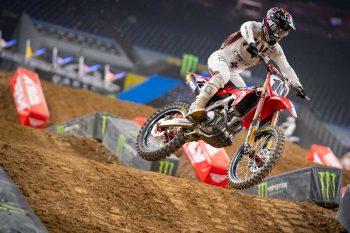 Muc-Off Honda Racing had a solid night in the 450-premier class at Round 1 of the FIM World Supercross Championship in Houston, where Justin Brayton finished inside the top ten with sixth in the final.

“We got great starts all night and the team worked hard preparing for this weekend. It’s a credit to them and how our decisions as a team really paid off, you know the Pirelli tyres were amazing tonight, the bike was smooth, it’s been a welcomed weekend of intense competition.” said Brayton.

Brayton moved to second in the first lap and raced inside the top three for five laps before ultimately settling for sixth. This result was equal to his best finish last year.

“Sixth was my top result from last year so this is a great way for me to start the Championship, something I can certainly build up from and refine each week. The CRF450R out of the box is amazing, so we are confident in it and together with our great partners and resources, we will aim to be faster each week.” concluded Brayton.

Muc-Off Honda Racing’s 250 rider, Mitchell Oldenburg started his season in very positive standings with an eighth in the final.

“What a difference a year can make, last year round 1 was rough; I crashed in the main, injured myself and finished 16th so finishing eighth tonight was a major improvement.” commented Oldenburg.

Following the 2020 Championship, Oldenburg had knee surgery so the season opener in Houston this weekend was his first big race in seven months.

“I spent a lot of time on the couch following the Championship last year. I had knee surgery and I didn’t know if I was going to get another opportunity to race in 2021. I am super thankful to the Muc-Off Honda Racing Team and I feel this is the beginning of a great season ahead.” added Oldenburg.

“Its awesome to be back in this atmosphere again and to come away with some solid results. Our guys rode really well tonight and I’m also proud of the relentless efforts of our entire team.” said Konsky.

This was the teams first race in the 450 class and Brayton’s sixth place is commendable.

“Brayton is a true champion, when the time came to race, he switched on and raced hard. We all believe he is still a podium capable racer. Now, we will get settled a little more, find our rhythm and I know the results will continue to come for both Brayton and Oldenburg.” concluded Konsky.