Puzzling first round for former champion results in 15th position. 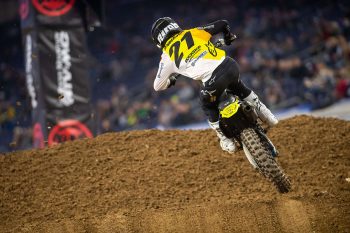 A case of arm-pump has been attributed to Jason Anderson’s puzzling late fade in Houston’s opening round of 2021 Monster Energy Supercross, according to the 2018 champion’s factory Husqvarna team.

Anderson was comfortably circulating within the top 10 through much of the first main event of this season until drastically dropping down the order in the final five laps and scoring 15th posiution.

After going a lap down to eventual winner Justin Barcia (TLD Red Bull GasGas), it was a disappointing end to what had been an otherwise promising first round of the 450SX championship. However, he’s optimistic that things can be turned around in time for Tuesday’s second round again at NRG Stadium.

“My night was not that good, but we’re going into the next round and going to stay positive about it,” Anderson said in the team’s post-race press release. “I was up to seventh and then I got arm-pump and kind of went backwards, but all-in-all we started the season and I’m happy to be back racing, so let’s go from there.”

Rockstar Energy Husqvarna’s Anderson is entering his first full season of premier class competition without training at the Baker’s Factory, transferring directly through to the final by claiming sixth place in his heat. His best lap-time in the main was also quick enough to match that of Barcia, third-fastest of all on track.