A lot learned by Ferrandis in encouraging first 450SX start 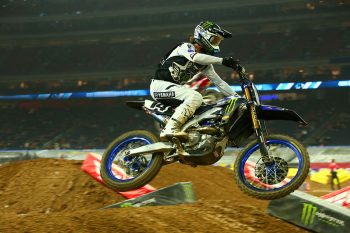 450SX first-timer Dylan Ferrandis was able to learn a lot in what was his maiden Monster Energy Supercross premier class start at Houston 1, overcoming the initial shock of lining up with the sport’s best to record a seventh-place result.

Ferrandis has won the past two 250SX West championships with Monster Energy Star Racing Yamaha and steps up to the YZ450F this season, however, he admitted on Sunday that it was a mental challenge to realize that he belongs in class.

Despite being regarded as one of the enforcers of Supercross, Ferrandis is taking a more casual approach in his transition and was satisfied to finish inside the top 10 on debut with a convincing performance. Now, that experience will be instrumental leading into H2 on Tuesday.

“There were many things [that stood out],” Ferrandis commented. “For me, what I struggled with a little bit in practice was to accept that I earned that spot, I earned that place in 450s. When I was on track with the guys, I realized that I was riding with all the racers that I admired when I was younger or even the last few seasons.

“Just to get the mindset of knowing that I need to race these guys now, I’m not just watching them, took some laps and even some sessions. Even in the main event it was pretty crazy because I was battling with [Cooper] Webb and [Jason] Anderson.

“It was mentally really hard just to accept that I am there with these guys and I need to fight with them and to race them now. It was pretty difficult, but yeah, I kind of know it now and I’m glad this first one is over. I’m looking forward to the second one.”

In contrast to Aaron Plessinger, who returns to Star Racing after two seasons riding the 450 class with Yamaha’s former internal factory effort, Ferrandis is graduating as part of the same program that he had so much success with in the lower tier. A hand injury in the pre-season has hampered his progress, but he has an idea of how to move forward one round in.

“The transition was really smooth because the team made a lot of testing before I jumped on the bike,” the Frenchman continued. “To get fast on the bike came really fast, but to get comfortable in any condition, that’s what I’m still chasing right now. With my hand injury I didn’t have a lot of time to try things on the bike riding in different conditions, so that’s what I’m missing.

“We plan in the future to do some testing with the team because there is still some stuff I would like to try, but the base is good. As we saw last night, the three Yamahas were in the top eight and that’s really good, so I just need more seat time and to ride the 450 more – last night sometimes in my mind it was almost like I was on a 250.”