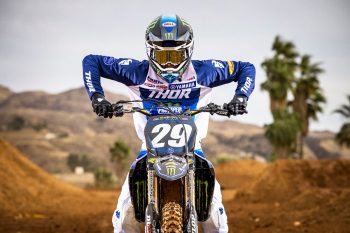 The opportunity to join Monster Energy Star Racing Yamaha in 2021 comes as a timely boost for Christian Craig, the 250SX class veteran embracing his newfound challenge.

Craig had spent over a decade riding Hondas, but had signed with Yamaha to ride the superior factory YZ250F prior to his former Factory Connection team’s closure last year.

A rejuvenated Craig will line-up for 250SX East from Houston this year, determined to challenge one final time for the title. His best result in Monster Energy Supercross previously came in 2016 when he was third overall in the western region.

“You could see in the past few years that I was kind of in a stale position,” 29-year-old Craig admitted on the eve of H1. “I was right on that verge of breaking through, but would have hindering injuries.

“I got a sense of trying something different and to give it one last shot in this 250 class before I go 450. I’ve always liked the program that Star has done with the trainer and riding together – I felty like I needed that.

“That was kind of like a missing piece for me, so now that I’ve got that, I’ve loved everyday riding and look forward to it. I fully believe in this program, it’s a winning team and I’m expected to win. That’s what I’m going to try and do.”

Craig’s capabilities on the 450 were once more proven in Lucas Oil Pro Motocross last season, earning sixth in the final 450MX standings as a fill-in rider at Team Honda HRC before stepping back to the lower tier for Supercross this season.