Muc-Off Honda US debut a special milestone for Brayton 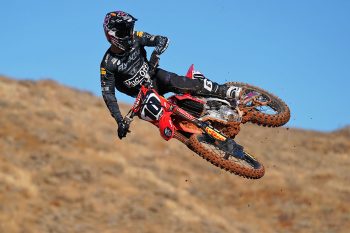 Four-time Australian champion Justin Brayton’s first appearance with Muc-Off Honda Racing will come as a special milestone for he and the team at Houston 1 this Saturday.

After spending a single season at Team Honda HRC and then making way for 450SX rookie Chase Sexton, Brayton will carry direct factory support into the Konsky Motorsport team in the US.

Signing Brayton is a major coup for the start-up squad in America, setting critical foundations with the experienced 36-year-old that will go a long way toward establishing a long-term US-based operation in addition to the continuing Australian effort.

“I’m pumped about it,” Brayton said. “We’ve worked together for four years. Yarrive and the crew have done an amazing job in Australia, coming here in 2020 with [Luke] Clout and [Mitchell] Oldenburg making a pretty big presence in their first year, so I’m stoked to go racing.

“I’ll have my same mechanic Brent [Duffe], working super-close with the Honda guys, so as familiar as it is, I really feel like I’ve been doing it for four years, we’re just lining up on a different gate here in America.

“It’s cool for Yarrive and the Aussie crew to do such a good job, to come here to America and have such a legit team and to be in both classes. It’s going to be a special time to be a part of it and I look forward to Houston – it’s going to be fun.”

Muc-Off Honda Racing – formerly Penrite Honda – has expanded into both classes for the 2021 Monster Energy Supercross season, fielding Brayton on-board the new CRF450R, while Oldenburg will ride 250SX East and Mitchell Harrison the western region. It will also transition from Bridgestone to Pirelli tyres for this year.

“We’ve got a really good bike this year, which it was last year, but I feel like we’ve made a lot of improvements,” commented Oldenburg. “We’ve been working closely with Twisted Development and KYB, so I can honestly say I haven’t felt this comfortable on bike in a really long time.

“I’m really blessed with the opportunity that these guys have presented for me and I’m just excited to pay them back with some decent results. Last year put a lot into perspective, to see the team’s excitement to be here with the Australians, so it reminds you this is something we’ve dreamed of since we were little kids.”