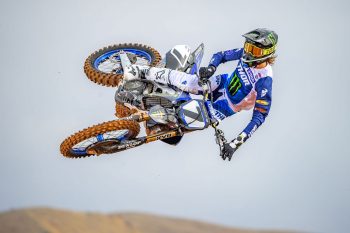 A simplified approach in developing the YZ450F in race-trim could be key in unlocking the model’s potential since Monster Energy Star Racing Yamaha took charge of the brand’s factory 450SX program.

Recognized as one of the strongest teams in the 250 class, Star Racing’s new three-rider premier class team of Aaron Plessinger, Dylan Ferrandis and Malcolm Stewart will be fascinating to follow in 2021.

With Monster Energy Supercross opening in Houston this Saturday, it’s been revealed that the Star team is building upon the familiar base it’s already made work with the YZ250F in recent seasons, while also maintaining the basis of Yamaha’s ever-popular production bike.

“When it comes to bike set-up, the good thing is the 250 and 450 are actually identical chassis,” Coker explained. “Albeit, the weight of the 450 is heavier, the engine’s more powerful, stuff like that, the biggest thing was to build a 250 with a 450 engine is pretty much what we did.

“Obviously, we know that our 250 works well and there’s no reason to stray very far from it. Also, being that the stock Yamaha 450 is a great bike, so don’t stray far from what the Japanese have done – that’s kind of where we’ve taken this set-up from.

“Of three different style riders, to be honest with you they’re on the exact same spec. Yeah, Malcolm has it a little stiffer, but beside that, it wasn’t very hard. I don’t have three completely different motorcycles, I have three almost identical motorcycles.”

Following two difficult years at Monster Energy Yamaha within the former in-house team, Plessinger said its a definite improvement being back at Star Racing, which is the same team he won the Supercross and Pro Motocross titles riding a YZ250F in 2018.

“I would say I’m almost on a completely different bike and it seems weird, but the Star guys have really made this bike feel like home for me,” Plessinger admitted. “The last two years have been rough, but I think this year I’m going to wake a lot of people up and do what I should’ve done a couple of years ago when I went to the 450 class.

“I think it’s amazing, the team – Star Racing – has done an unreal job of the bike, they’ve really turned it around and got me to where I felt like I left off in 2018, which is really exciting for me. I’m looking forward to getting to Houston and showing people what should have happened two years ago.