Injured McElrath remains hopeful of recovering in time for H1

Premier class newcomer will be in Houston and hopes to make round one. 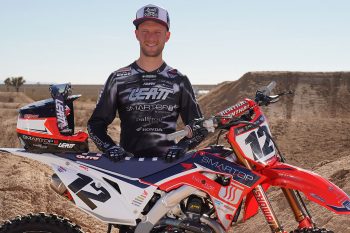 There is still hope for Smartop Bullfrog Spas MotoConcepts Honda’s Shane McElrath to line-up at Houston 1 on Saturday, despite separating his shoulder just last week.

McElrath refuses to rule himself out of the opener, which will mark the beginning of his full-time 450SX career, and will attend round one in case he is declared fit to ride.

A lack of strength in his shoulder will prove the biggest obstacle to overcome, but by using pain as the primary decider, there is still a minor chance that the highly-rated rookie will in fact be able to overcome the odds and compete.

“We’re still doing everything we can and that’s kind of the hardest thing right now,” commented McElrath this week. “Doc G told me to let pain be my guide and I can deal with some pain, but without much strength there, that’s the hard part.

Although he never actually won a 250SX title, McElrath has long been a threat and won three races last year on his way to runner-up behind Chase Sexton in the eastern region. For him, the challenge of stepping up is a welcome one and he will be under the radar once fit to start.

“For myself, it’s still the same mentality as the 250 class – we all want to win and I’m a super-competitive person,” he said. “It’s going to be a big year of learning… I’ve been able to study the class a lot, but it’s a big undertaking to step up to the 450. I’m excited, it’s a big challenge, but one that I’m ready to face.”