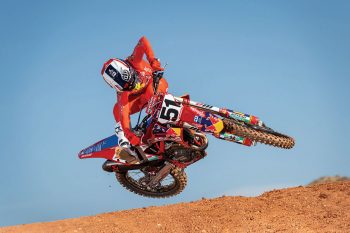 Already announced back in November, media were invited to the team’s Californian test track for what was the official launch one week out from Monster Energy Supercross.

“We may be new to the GasGas brand this year, but we are not new to the Supercross racing scene,” explained Troy Lee Designs team manager Tyler Keefe. “It’s been a lot of work for everyone involved in order to get this team ready to go racing.

“I know that we have a strong team of riders and crew behind us to make it happen. It’s been a dream come true for Troy to have a 450 racing effort and he is beyond stoked to debut in the 450SX class with Justin Barcia next weekend.”

While Barcia will lead the squad in 450SX riding the sole factory MC 450F, it’s been revealed that Mosiman will compete in 250SX East beginning at the 2021 season-opener, while Brown will best in 250SX West.