Monster Energy Pro Circuit Kawasaki has signed just one rookie for the 2021 season, with long-time Team Green amateur racer Seth Hammaker receiving his ticket to ride the professional ranks with one of the most formidable teams in the sport.

At 20 years old, Hammaker is at the older end of the spectrum for rookies looking to make their debut in the big leagues, but he doesn’t think that’s necessarily a bad thing.

“Yeah, I’m older than most of the teenage rookies coming through, but I think having that extra maturity will help me out,” he says. “At the same time, I’m still able to get tips from my teammates, who have more experience racing Supercross, and I can lean on that if I need it. Knowing they can pass on their knowledge and help you out eases your mind.” The middle child of three, the PA native has been around dirt bikes most of his life – his dad used to dabble in woods racing – but with the exception of making regular annual trips to Loretta Lynn’s, Hammaker and his family were content to keep it casual and race locally until he was 14 years of age.

“Racing was always for fun growing up and I’m glad that’s how it started, because I still find it fun now, even though it’s turned into a career,” Seth explains. “My parents never heaped pressure on me and said they’d support me as long as I gave it my best and put the effort in. They never cared about results, as long as I tried my hardest.”

With a relaxed, fun, home environment, it wasn’t long before the results started coming. In 2016, Hammaker won the Super Mini 1 class – his first and only championship at Loretta’s (beating his now team-mate Jo Shimoda in the process) and placed runner-up in the Super Mini 2 class.

In 2017 he stepped up to the B class and finished second to Garrett Marchbanks in the 250s and fourth in Schoolboy 2, then replicated those same results in 2018 when he jumped to the A class (second in Open Pro Sport to Derek Drake and fourth in 250 A).

After missing 2019 with injuries, another spanner got thrown in his 2020 campaign, when he was diagnosed with Epstein Barr virus just weeks out from the annual amateur nationals at Hurricane Mills and was forced to sit on the sidelines for the remainder of the season.

It was a frustrating end to his amateur career, as the intention had been to race his final Loretta’s for Team Green, then step up to the Pro Circuit team for the Lucas Oil Pro Motocross Championship. With the first two rounds of the championship taking place at the Ranch, it would’ve been a perfect stepping stone from which he could launch his pro career. 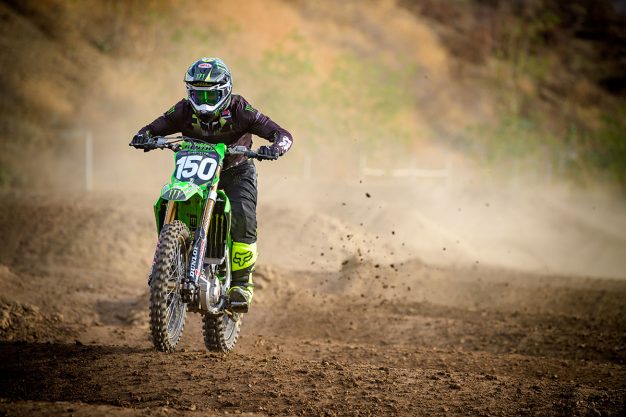 “I was really bummed that this year went the way it did. I would’ve loved to have started my pro career at the same track as my last amateur race,” Hammaker adds. “A lot of people don’t like Loretta’s, but I love it, and it would’ve been cool to race there at a pro level. I kinda hope they hold something like that again in the future.”

After copious amounts of rest and downtime to beat the virus, Hammaker is now back to 100 percent health and is chomping at the bit to start the next chapter of his career, albeit in a discipline he’s only had limited experience at. Whether he’s on the west or east region of 250SX, he has clear goals in mind.

“Supercross is coming to me – I see myself as a technical rider and every time I go out there to practice it starts to come a bit more natural,” he explains. “The whoops are definitely the biggest learning curve for me and being able to get those good consistently is the toughest part. It just takes time.

“I’d like to be in the top five starting off, then working my way up to podiums by the end of the championship. I just want to be up with the top guys and gaining that experience, because that and staying healthy will take me a long way.” 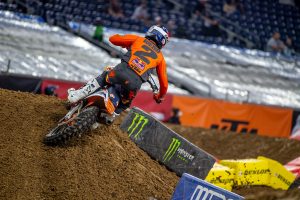 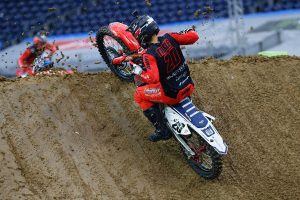 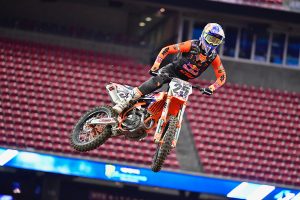