Both Jett and Hunter to ride CRF250Rs for 2021 within in-house program. 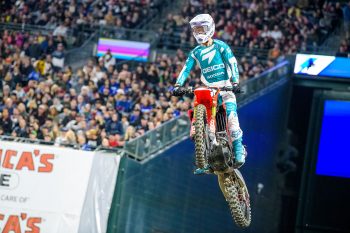 Following the dissolution of Factory Connection-operated Geico Honda organization, the Lawrences will be alongside HRC premier class duo Ken Roczen and Chase Sexton.

“The 2021 season will be upon us soon and our team is working hard to prepare,” said Brandon Wilson, manager of advertising and motorcycle sports at American Honda. “While we were sorry to see Factory Connection’s race team shut down, we’re pleased to continue a relationship with their company.

“We’re excited to have such a talented rider line-up for both classes. When you also factor in our solid team structure, there’s every reason to expect a positive performance from Team Honda HRC next year.”

After moving from their home country in Australia to learn their craft in Europe, the Lawrences first signed with Honda ahead of 2018 and moved to the US that following season as part of a multi-year agreement.