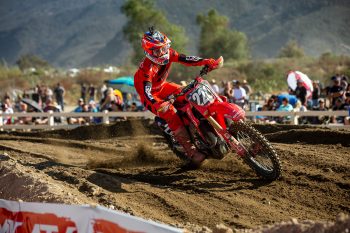 Longtime Honda amateur prospect Carson Mumford will remain a red rider in 2021 after confirming his future with the Chaparral Honda team.

The 18-year-old completed his first full season as a professional with Geico Honda this year prior to its closure, but will again be aboard a CRF250R next season.

“Coming into the 2021 season, I’m going to be riding for Chaparral Honda,” Mumford announced. “Super-stoked to be on the team, everything’s been going super-well. I haven’t really been posting much about what I’m going to be doing, but I finally got the contract signed and getting things rolling.

“Just started riding the bike and getting to work with the team more and more. I gelled with the XPR engine right away, same with the Enzo suspension – it was super on-point – and I got to work with [Yoshimura] and got some stuff going right away that felt at home, so I’m happy with that. Pirelli tyres are a little bit new, I’ve never ran those in my entire career.

“Just super-stoked to be where I am at. There was kind of a period there where I didn’t know what was gonna happen, as far as maybe I was just going to be a fill-in rider for who knows where or I was thinking about maybe buying bikes, but Chaparral stepped up with Michael Lindsay’s team and just got the ball rolling there and I’m happy to be here.”

Mumford was 12th in the final 250MX standings following the 2020 Lucas Oil Pro Motocross Championship, his best overall of ninth coming at WW Ranch and Fox Raceway. He is yet to debut in Monster Energy Supercross, instead riding Supercross Futures this year.