Tickle drafted in for 2021 after Hill splits with MotoConcepts 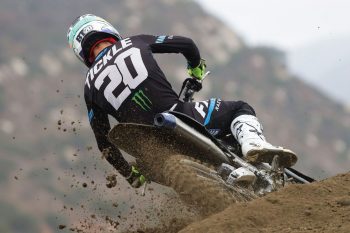 Broc Tickle is in, Justin Hill is out at Smartop Bullfrog Spas MotoConcepts Racing Honda, despite Hill previously being announced for the 2021 Monster Energy Supercross season.

It was revealed this week that Tickle had been testing with the MotoConcepts team and he’s now confirmed to be taking the position of Hill for next year.

The opportunity to ride alongside Vince Friese, Benny Bloss and Shane McElrath in 450SX comes as a career lifeline of sorts for 30-year-old Tickle, who had been looking to secure his future after spending this year with JGRMX Suzuki and Monster Energy Yamaha on return from suspension.

However, it instead leaves Hill’s future uncertain, the 25-year-old yet to confirm his alternate plans for the new year. Hill was 10th in the final Supercross standings in 2020, his best result of fifth position arriving in Tampa.

An expended MotoConcepts roster will see Friese in charge of 2021 CRF450R development, while Bloss, McElrath and Tickle campaign the race-proven current model Honda throughout the scheduled 17-round series that will commence in Houston on 16 January.