When Zach Osborne clinched the 2020 Lucas Oil Pro Motocross Championship in October, he broke a three-year championship win streak held by Monster Energy Kawasaki’s Eli Tomac, which began with an unpredictable 2017 series that saw no less than five different round winners in 12 weekends.

Despite coming up short to Ken Roczen in his pursuit of his first-ever 450MX championship in 2016, everyone knew it would be a matter of time before the floodgates would open for Tomac. It was staggering to think that a rider could stand on 10 podiums at 12 round podiums, including two overalls and still lose by 86 points to the rampant Roczen.

Adding insult to injury, Tomac was licking his wounds after losing the 2017 Monster Energy Supercross Championship by just five markers to Ryan Dungey. So when the 2017 outdoor championship rolled around, and with the defending champion Roczen sidelined with his horrendous wrist injury, it was naturally assumed that Tomac would be the next in line to the throne. 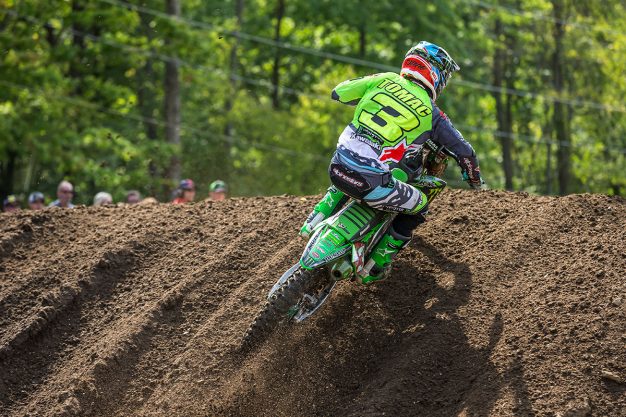 The Monster Energy Kawasaki pilot started out of the blocks at Hangtown with a dominant performance, but bad starts and a mechanical issue at the following round at Glen Helen saw him struggle home to ninth overall for the day and relinquish his championship lead to Marvin Musquin (Red Bull KTM).

Tomac saw himself get deeper in trouble the next weekend at his home track at Thunder Valley, where his 7-2 result saw him fall even further behind his French rival. Just when things couldn’t get more complicated, Blake Baggett (Rocky Mountain ATV/MC KTM) hit his stride and picked up his second round win on the trot the next weekend in High Point, leapfrogging his way to the top of the points standings.

Meanwhile Tomac salvaged a fourth overall and Musquin, who tore his meniscus, in a first moto crash, limped home in 11th. With his back to the wall, it seemed the spark was ignited in Tomac and he caught fire, winning the next three rounds at Muddy Creek, RedBud and Southwick. The string of dominant performances saw him wrest the championship lead from a hard-charging Baggett and begin to put a bit of daylight between himself and the rest of the pack.

Podiums at Millville and Washougal saw Tomac having to manage his lead as Musquin rebounded to win four motos in a row. The 2017 Unadilla mud-fest proved to be a battle for survival as Tomac slid his way to sixth overall, as Musquin again won both motos, but with a 27 and 31-point cushion over Baggett and Musquin respectively, Tomac was still able to keep both the KTM-mounted racers at arm’s length.

A third overall at the penultimate round at Budd’s Creek saw Tomac give up just one point to Musquin (while Justin Bogle turned heads with a round win) as they headed into the final round at Ironman, Indiana. Adding another complication to the mix was the fact that Dutch sensation Jeffrey Herlings decided to take part in proceedings before the US round of the MXGP the following weekend.

Herlings spoilt Musquin’s party by dominating the day, meaning the Frenchman had to settle for second overall, while Tomac decided to play the long game and settled for sixth overall, despite trying to race Herlings in the first moto and crashing, before recovering to fifth. 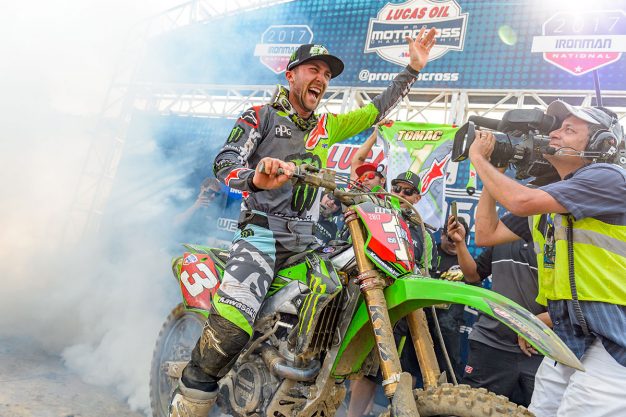 “I think my ego got the best of me. After I went down in the first race, I was more angry that the clutch was banged up and I couldn’t reach it,” Tomac explained afterward. “I knew that if I could catch one more position I could wrap the championship up with a race left to run, but I couldn’t get it done.”

Needing just one point to claim the title in the final moto, Tomac cruised to a sixth place, solidifying a memorable breakthough win for Tomac, as he claimed his first 450 Class championship by 17 points over Musquin.

As for Baggett, who’d been holding down second position in the championship until the very last moto. A 3-3 result at Ironman ultimately saw him slip from second to third in the points-standings. For Tomac, though, the experience of finally holding that 450 trophy aloft was a huge weight off the shoulders, especially after narrowly losing the Supercross championship earlier a few months prior.

“It was a crazy year, after just missing out on the supercross title earlier, but it feels like a weight off the shoulders to finally put it all together and claim my first 450 title,” he reflected. “To be here, looking at the trophy and seeing all the names on it, it’s pretty unbelievable. It’ll take a while to sink in, but it’s been a long time coming.”

Tomac went on to successfully defend the Pro Motocross 450MX title in 2018 and 2019 with a three-peat of championships, becoming the first racer since Ricky Carmichael to claim three-straight premier class number one plates in a row.