MXGP veteran Paulin to retire at the end of current season 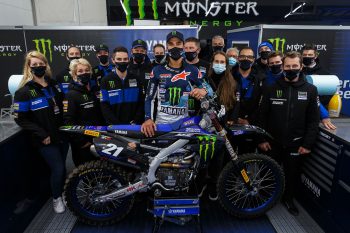 Frenchman Gautier Paulin has announced that he will retire at the conclusion of this year’s MXGP World Championship, choosing to hang up his helmet after departing from Monster Energy Yamaha.

Paulin is currently sixth in the 2020 standings after winning a moto – his first since 2017 – and finishing on the podium at Lommel 1, but won’t continue next season.

“It is with a great deal of emotion that I have decided to call time on my career,” announced the 30-year-old. “I have dedicated my whole life to my sport and it has made me the man I am today. I had a wonderful awakening in 2007 when I signed my first pro contract and won my first title – it set me on a path I had dreamt of.

“I’m so grateful that I got to fight with the best riders in the world, gain the trust of the most prestigious companies and brands, wear my nation’s jersey for 11 consecutive years at the Motocross of Nations (MXoN) and win the event. I love challenges, performance, hard work, and having the desire to give my best.

“I’ve experienced indescribable feelings of joy, I’ve led the MX2 and MXGP world championships, sang the Marseillaise with the public and lived through strong emotions that have marked me forever.

“I also have the most unbelievable fans and I humbly thank every single one of them, as well as every single person that helped or believed in me for the last 15 years and more. Sport unites us, now it is time for the next chapter.”

Monster Energy Yamaha has already confirmed that Jeremy Seewer will continue on-board the factory YZ450FM next season alongside Ben Watson, who will transition from the MX2 category for his rookie premier class campaign. It’s also expected that Glenn Coldenhoff will join Yamaha after exiting GasGas.