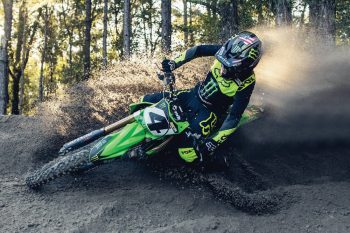 Ricky Carmichael has surfaced riding a Pro Circuit-prepared Kawasaki KX450 following his split with Suzuki earlier this year, going back to his ‘Team Green’ roots that saw him arrive in the professional ranks over two decades ago.

Not announced as an official ambassadorship with the Kawasaki brand, instead 40-year-old Carmichael has reunited with Pro Circuit’s Mitch Payton – the team that he began his career with in the late ’90s.

“I’m excited to share this video and new venture,” Carmichael announced. “I also want to say how excited I am to be working with Mitch and back riding one of his bikes. He’s been such a big part of my career over the years regardless the color I was riding.”

Carmichael, who retired from full-time competition in 2006, ended his 15-year association with Suzuki as racer, team owner and ambassador throughout that time. He’s since been seen riding an assortment of Triumph models, however, the Kawasaki is the first motocross bike he’s ridden publicly since.