Championship in good hands as entertainment company looks to future. 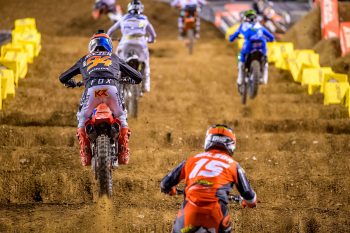 An ongoing commitment to the sport has been reaffirmed by Feld Motor Sports in releasing the 2021 Monster Energy Supercross schedule, clarifying that the series is not currently for sale amid minor off-season speculation.

Feld Entertainment has experienced significant disruptions as a result of the coronavirus pandemic that has put live shows and sport on hold this year, however, operations are recommencing and Supercross has been set for the new year.

“We tend to hear all kinds of crazy things and the rumor mill goes rampant, but let me confirm that we are not for sale – Supercross is not being sold,” stated Sean Brennen, Feld Entertainment public relations manager – Motorsports, during a media roundtable earlier today.

Supercross has become an integral part of Feld Entertainment since it was acquired in 2008 and, according to both Brennen and Dave Prater, Feld Motor Sports director of operations – Supercross, the Florida-based company sees itself as the ‘stewards’ of the sport in a bid to further enhance the series. Staff have worked tirelessly over the past seven months to ensure the gates drop on 2021.

“We just want to be the stewards and help in advancing the industry. And so, that’s really the way we see our role. We’re just, we’re here, we’re doing our part to grow Supercross while we have it. Supercross sport is bigger than any of us and we continue to strive to grow it and make it even larger.”

Feld successfully completed the 2020 Monster Energy Supercross season behind closed doors this year in Salt Lake City to crown the series champions and, just this month, led the return of Monster Jam with live audiences in Arlington. Its other major brand, Disney on Ice, returns in Dallas during November.

A unique 17-round 2021 Supercross schedule has been released by Feld Motor Sports today, which is expected to have crowds in stadiums at 20-25 percent capacity. It’s financially challenging, but a step that has been taken in order to keep the sport in action between January-May next year.

“There’s really no way around it – we’re definitely going to be taking a hit financially just with limited capacity,” added Prater. “Yes, stadiums are working with us, we have great relationships across the board with all the stadiums that we’re racing at as well as all the stadiums we’ve historically raced at, but, they’re challenged as well. We’re doing our best to make the best of the situation.”