Recapping the year that was for Supercross and Pro Motocross newcomers.

The 2020 season was a year that saw a number of rookies step up and test their skills in an entirely new field. Some were amateurs who’d been promoted to the big leagues, while others had taken the leap from 250s to the 450 class. In this edition of Rated, take a closer look at eight racers who transitioned and recap how they performed across Monster Energy Supercross and Lucas Oil Pro Motocross. 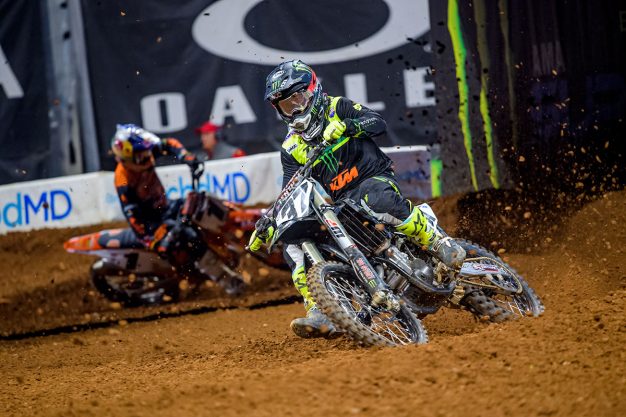 Rider: Adam Cianciarulo
Rating: A
Rundown: You can’t ask for too much more out of a first season in the 450 class than to threaten for race wins in Supercross and challenge for the title outdoors. While it had its ups and downs, Monster Energy Kawasaki’s Adam Cianciarulo will chalk up 2020 as a positive. After qualifying fastest at a staggering seven 450SX races and claiming two runner-up places at Anaheim 1 and San Diego, he crashed hard at Arlington and broke his collarbone. His return at Salt Lake was short-lived when he crashed on the opening lap and the resulting back injury saw him sit out the rest of the series. When Pro Motocross commenced, AC led Loretta Lynn’s 1 before crashing, but from that point on, the likeable Floridian never finished outside the top five overall. His great starts and ability to link together consistent, fast laps saw him win two rounds at RedBud 2 and Millville, and push eventual 450 champion Zach Osborne to the last moto to secure the title. No doubt about it, Cianciarulo is living up to all the hype and big things are expected of him next year.

Rider: Jett Lawrence
Rating: A-
Rundown: Arguably the biggest rookie revelation of 2020 came in the form of Australian teenager Jett Lawrence. The Geico Honda rider not only has searing pace, but his personality that has polarized fans since some love the attitude he brings, while others believe he needs to be pulled back a couple of pegs. On the track though, there’s no doubting the talent the 17-year-old has. He scored his first-ever podium at the penultimate round of 250SX East at Salt Lake City 6, then broke through for a memorable round win at the final hit-out of the 2020 race season at Fox Raceway at Pala. While the Geico Honda team might’ve now shuttered its doors, expect Lawrence to remain with Honda next year alongside his older brother Hunter. Inexperience and the fact that he was strong both in Supercross and Pro Motocross bumped his rating into the As.

Rider: Chase Sexton
Rating: A
Rundown: After successfully defending his 250SX East title, Chase Sexton’s jump up to the 450 class for the outdoors came as a shock when he was initially signed. It was an even bigger surprise at how good he was on the Team Honda HRC CRF450R from the outset. Right from the first gate-drop, Sexton was rattling cages. At Loretta Lynn’s 1 – his first outing in the premier class – he qualified fastest and placed an astounding third in the second moto on his way to eighth overall. Two rounds later at RedBud 1, he scored his first overall podium (second overall) and it seemed that from that moment on he began putting all the puzzle pieces together. Sexton finished in the top five at each of the final four rounds of the championship, culminating with his first overall win at Pala. By winning that final race of the season, it was a result that will give the already-loaded 450 field plenty to mull over during the off-season and firmly established him as a very real title contender next year. Of course, this is purely rated from his first year on the 450 outdoors and it will be a huge help come next year. 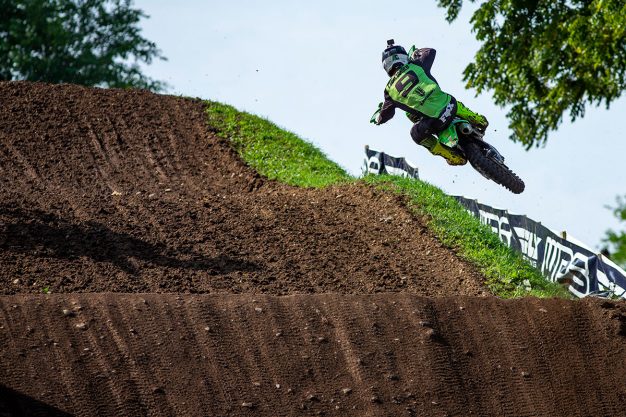 Rider: Martin Davalos
Rating: B+
Rundown: Finally, Martin Davalos has stepped up to the 450SX category of Supercross after landing a deal with the Monster Energy-backed Team Tedder KTM outfit and, all in all, it was a successful stint over the 17-round season that saw him earn ‘Rookie of the Year’ honors. The 33-year-old managed to show up at every event, improved as the series went on and logged a bunch of important premier class experience that will be vital come 2021. His lone top five finish came in Atlanta, where he was fifth in the main event, but aside from that Davalos delivered four more results inside the top 10. All of that came despite fracturing his tailbone at Daytona, which fortunately for him, came directly prior to the COVID-19 stoppage. By season’s end, Davalos finished 11th in the championship standings and we haven’t seen him since, due to being on a Supercross-only deal.

Rider: Jalek Swoll
Rating: B-
Rundown: The Rockstar Energy Husqvarna rider made his Supercross debut in Arlington, which was round two of 250SX East, and he immediately found consistent top 10 form. A trio of ninth-place finishes were achieved, then he improved to seventh two races in a row, before climbing to sixth at Salt Lake City 3 and that was as good as it got. Despite a more difficult final couple of rounds, Swoll was seventh in the championship standings and that was a decent result, all said and done. Pro Motocross was a struggle for Swoll, being concussed at the opener and then opting out altogether with a shoulder injury that he decided to have fixed following the WW Ranch round. 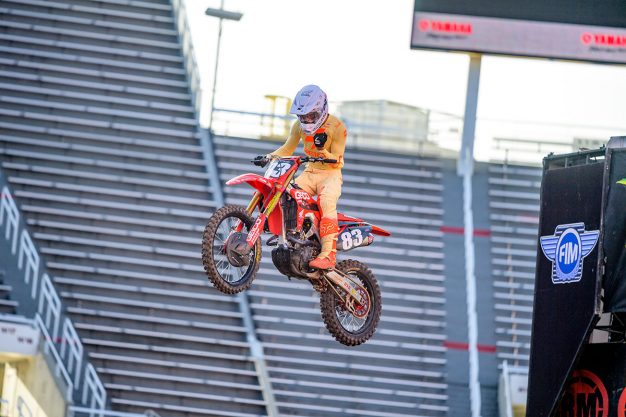 Rider: Jo Shimoda
Rating: B
Rundown: Eighteen-year-old Japanese racer Jo Shimoda found a more consistent showing of form as both championships wore on. While he didn’t finish any higher than fifth at both Atlanta and Salt Lake City 6, his ability to remain relatively consistent throughout the series (except for a DNF at the opening SLC race) when the rest of the field turned itself upside-down and inside-out every week, saw him finish the 250SX East championship in an impressive third overall. The Geico Honda rider was then able to put a horror start to the Pro Motocross series behind him – he placed 16th and 25th at the opening Loretta Lynn’s rounds – and found his feet in the talent-packed 250 class. A career-best fifth at the final round at Pala, including P3 in the final moto, signalled to the rest of the field that although he didn’t feature on any round podiums this year, it’s only a matter of time before he’s holding some hardware above his head.

Rider: Pierce Brown
Rating: C+
Rundown: One of the fresh faces to this year’s Troy Lee Designs Red Bull KTM team was Pierce Brown and it didn’t take long for the kid to start making some waves in the 250SX East championship. The team held him back from racing the first to rounds at Tampa and Arlington to make sure he was ready following injuries and he rewarded them by qualifying fourth-fastest at his first-ever Supercross in Atlanta. Over the six rounds he raced, he finished sixth or better at four of them, with crashes marring his first outing at Atlanta and Salt Lake City 2 and he capped the season off with a brace of fourths. Unfortunately, the Utah local didn’t show the same turn of pace when the outdoors started. Over the four rounds he contested, he finished between 14th and 20th, before pulling out of the championship to undergo knee surgery.

Rider: Derek Drake
Rating: C
Rundown: Any rookie who could consistently place inside the top 10 in the stacked 2020 250SX West championship is worth having a second look at. The new Troy Lee Designs Red Bull KTM recruit showed plenty of promise and some flashes of brilliance this year, including that memorable moment when he led several laps of the Glendale main. With the exception of Anaheim 2, the Californian teenager held down results between eighth and 10th throughout the championship, on his way to a well-deserved seventh in the points standings. After gaining experience last year, Drake began the Pro Motocross championship in a similar fashion and raced to positions between 10th and 12th every weekend before he began to suffer health issues. He failed to start the second moto at both Florida – where he qualified third fastest – and Thunder Valley, before missing the final round altogether.