Lessons of first 450 season add to confidence of Cianciarulo

Belief from within sets Monster Energy Kawasaki standout up for 2021 season. 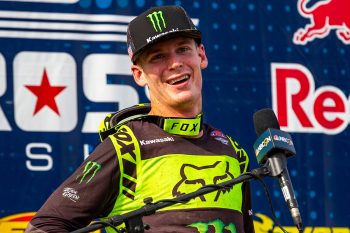 Monster Energy Kawasaki’s Adam Cianciarulo has taken confidence from lessons learned in 2020 as a rookie aboard the factory KX450, adding belief that he can be champion at the very top level of the sport.

Cianciarulo displayed immense speed in Monster Energy Supercross despite a series of mishaps and then claimed second in the 450MX standings on debut.

It was a remarkable Lucas Oil Pro Motocross season for Cianciarulo as he won the RedBud 2 and Spring Creek rounds, but ultimately fell short of eventual champion Zach Osborne (Rockstar Energy Husqvarna) in the championship.

Those victories will boost Cianciarulo as he prepares for his 2021 campaign and he has said since that knowing he has what it takes to win in the premier class will be instrumental into the future.

“The biggest lesson that I learned is that I can win, I think,” Cianciarulo reflected. “I mean, a massive amount of confidence for me, getting my first win and feeling like you can do it. It’s one thing to know deep down you can do it and it’s another thing to really prove it to yourself.

“It’s like right there in front of you, you just won a national – everything starts to flow a little bit easier. I have more belief than I had to start the year, to be honest, and that’s just the way it goes.”

Following a lengthy stint at Monster Energy Pro Circuit Kawasaki, which resulted in the 2019 250MX title, Cianciarulo will also gain strength in the fact that he has spent a full year with the 450 team.

“I think too, with the bike set-up, I’ve learned a lot about the bike and what I like on the bike,” he said. “Obviously, my first year with Oscar [Weirdeman], my crew chief, and my mechanic Justin [Shantie], the chemistry’s going to continue to get better there. Overall, I think it’s the belief.”

Cianciarulo revealed last week that he will undergo a procedure on his wrist prior to beginning 450SX testing for the new year, set to continue working with Nick Wey and also training at the Stewart Compound through next season.