Red Bull KTM rider impacted by crashes during second half of series. 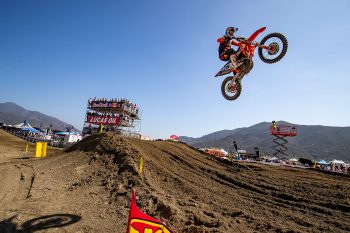 A quiet end to the 450MX series for Red Bull KTM’s Marvin Musquin saw him drop to fourth in the final standings, marking a disappointing end of the 2020 season.

Musquin recovered from knee surgery in time to make the delayed start of the Lucas Oil Pro Motocross Championship, but major incidents at Spring Creek and WW Ranch took the wind out of his sails.

Fox Raceway on the weekend was an improvement over the penultimate round in Colorado, lodging 6-5 scores for fifth overall. That resulted in P4 for the championship on return from injury.

“It’s good to be here and to see that the season happened,” Musquin recalled. “For me, I got lucky that we started the season later in the year because I had a big knee surgery done in December and it took me a very long time to come back.

“It was a tough season, I ended up fourth overall, so I’m disappointed on my last three rounds, but I gave my best and at least I was behind the gate and trying to battle.

“It was definitely a big challenge for the last three rounds after having two big crashes, but I’m glad I finished the season. I’m ready for a break but I’m looking forward to coming back healthier for Supercross.”

The end result was Musquin’s worst since stepping up to the premier class back in 2016, always finishing inside of the top three overall for the past four seasons while contending for the crown.