Frenchman to partner Plessinger in new-look factory 450 operation for 2021. 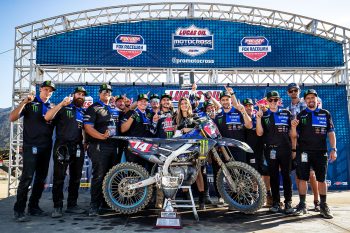 At 26, Ferrandis will step up to the YZ450F after delivering Star Racing and Yamaha three 250 championships in the last two seasons.

The Frenchman will lead a new-look 450 program from Yamaha as it ceases its internal operation and outsources the team to Monster Energy Star Racing Yamaha. It is an exciting prospect and one that has taken place following the exit of Justin Barcia, who has been linked to the TLD GasGas team.

“It’s been a dream of mine to fight for a championship in the 450 class in the US,” Ferrandis stated. “I’m so happy to be able to do that with the Monster Energy Star Yamaha team and I feel at home there. I’m still feeling in paradise with two championships this year, but we will get back to work to fight next season.”

For Plessinger, the reunion with Star Racing following two years in the factory 450 team will be a crucial one as he works to establish himself as one of the sport’s elite in the top category. He won the 2018 250SX West and 250MX championships with the organization.

“I’m really excited for next season with Monster Energy Star Yamaha Racing,” Plessinger commented. “I really had a good run with the team in 2018 with the 250 Supercross and motocross title – I love the team over there, I love the people on the team and I think we work really well together.

“The last two years haven’t been too good for me with some injuries and bad luck. I’m looking forward to getting back to my winning ways and having a good time doing it. Going into 2021, I couldn’t be more confident. With this team going in behind me I think we can do extraordinary things next year.”