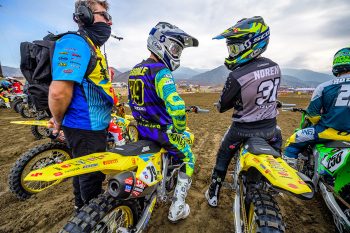 All three of JGRMX Yoshimura Suzuki’s team regulars were ruled out of the final round of Lucas Oil Pro Motocross in a disastrous way to complete the 2020 season.

250MX contender Alex Martin fractured his leg in the morning and ended up sixth in the final standings after challenging for third in stages.

“Unfortunately I wasn’t able to compete at the final race because of a practice incident leaving me with an injury to my right leg,” Martin said. “I’m pretty disappointed, but we had many positive races this year and we were in the hunt for a top three in the championship down to the last race.”

After missing Monster Energy Supercross, Joey Savatgy’s season ended prematurely due to a foot injury sustained at Thunder Valley’s penultimate round of the year.

“I wasn’t able to race the final round, unfortunately,” commented Savatgy. “A nagging injury from the previous round stayed around longer than I thought it would. I was glad to be back at the races, but it was a tough year.”

Swedish racer Fredrik Noren’s season unfortunately also got cut short at the final round, surprisingly by a knee injury that required him to withdraw from the final round in Pala.

“I was told that I definitely shouldn’t race, so decided not to,” Noren said. “After the race new X-rays showed nothing. It’s frustrating, but I’m also happy I’m not injured.

“Overall, I’ve had a great time with the team and I had some good highlights this season – I’m especially happy about my first holeshot and career-best moto finish. I’m happy that we could race considering these crazy times.”

All of those issues left support team rider Isaac Teasdale as the lone JGRMX entry on the weekend, impressing once again as he went 13-11 for 12th overall in an inspiring effort.

“After learning I was the lone JGR Suzuki rider, I was ready to get my best result,” Teasdale explained. “In moto one I had a great start but got pushed wide. I had a fast pace, but rode tight and finished 13th.

“In my second moto, I felt better throughout and was close to the top 10, but finished 11th, which is my best finish to date. I really wanted to be in the top 10 this weekend – I was right there.

“I am content and happy with the progress I made in these last four races! It was so awesome to be with JGR and Suzuki and I grew a lot. I’m excited for the future.”