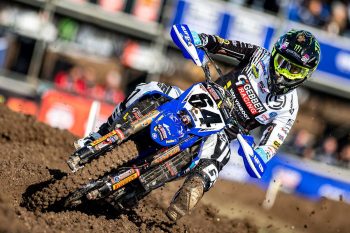 American international Thomas Covington has announced his retirement from the sport after experiencing a difficult return to Europe in the MXGP World Championship this season.

Covington, 24, endured a difficult year with Rockstar Energy Husqvarna in 2019 after being struck with Epstein-Barr virus, prompting a return overseas with Gebben Van Venrooy Yamaha Racing.

“I’ve decided that it was time to move on to something new,” Covington announced. “To stop racing is one of the toughest decisions I’ve ever made in my life, because it’s all I’ve ever done for the last 20 years. With the way that everything was going, I just wasn’t really willing to take the risks that I used to take.

“I don’t know if it has to do with some crashes I had before the Supercross season last year – I hit my head a couple of times and knocked myself out – I just wasn’t really in a position to do that anymore and I just felt like someone else should have this spot. There aren’t that many spots in the MXGP class, especially factory-supported spots, and I just feel like it’s time for me to move on to something new and start a new chapter.

“Coming into the season I had a new deal with Yamaha and I was really positive and really excited about getting back into GP racing. I missed a lot of the off-season preparation that I normally would have had because I got over to Europe a little bit late and I wasn’t super-healthy. I kind of delayed my off-season stuff and then kind of got thrown straight into the deep end when the season started.

“I was still positive though, I knew it was going to be difficult my first year in MXGP and thought I would just stick it out and keep working and it would come to me. When the racing started, I struggled a bit more than I thought I would. The break with coronavirus actually helped me because it actually gave me more time to get comfortable on the bike and I really wanted to capitalize on that.

“I feel like I gave it all I had during those months with the coronavirus. I really worked my butt off training and doing as much testing that I could to be as prepared as possible for the next part of the season if there was going to be a season. I was going to give it everything I had and I still believed in myself and thought I could do it. However, when it came crunch time out on the track, I just couldn’t force myself to hold the gas in when I needed to.”

Covington had won four MX2 World Championship rounds with a best of fourth in the standings in 2017 prior to eventually heading home last year, however, in his maiden MXGP season this year his best result has been 16th at Emilia Romagna in Italy. He sits 34th in points.