Tickle finishes out the season inside the top 10 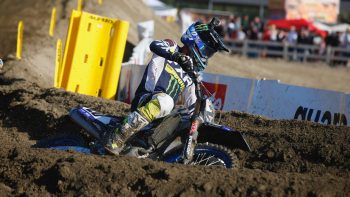 Monster Energy Yamaha Factory Racing Team’s Broc Tickle closed out the 2020 Lucas Oil Pro Motocross season with a ninth-place overall (8-9) at a fast, dry Fox Raceway in Pala, California. Justin Barcia had a solid qualifying effort in the eighth, but ultimately pulled out the motos not feeling 100 percent from his injuries sustained at the previous round at Thunder Valley.

Knowing he was the only Monster Energy Yamaha Factory Racing rider on the track, Tickle did what he could to put his Yamaha YZ450F in a good position. In Moto 1, he started off well in the top-10. The track was difficult to pass on, but Tickle was able to make some passes and finished out the moto in eighth. The second moto saw Tickle get an even better start, coming around the first lap in eighth. He was ready to put in a top finish, but came together with another rider near the mechanics’ area and went down. He got up in 27th and charged through the pack, ultimately finishing inside the top-10 in ninth.

“Today’s finale at Fox Raceway didn’t go as we had hoped it would. Justin still had some lingering injuries from last week’s crash. He was able to make it through both qualifying sessions but unfortunately, did not race. Broc got a great start in both motos today. He finished ninth in the first moto. In the second moto, he got another good start but then had a crash in front of the mechanics’ area. Broc picked up the bike and was able to charge back to ninth for ninth overall.

“Justin and Broc finished the year seventh and ninth, respectively, in the championship. I want to say thank you to both riders and the team for their hard work during a tough season. Congratulations to MX Sports for getting the season in under the challenging conditions of 2020.”

“Summing up the season after Pala, I would say it wasn’t what I was hoping for. I had a couple of bad motos this season and missed, honestly, four motos. That being said, it was a solid effort after not having raced in three years, and in the end, we were able to finish the championship inside of the top 10. I’m grateful for this opportunity with the Monster Energy Yamaha Factory Racing team and thankful that I was able to come out and race and enjoy being with the team I was around. I’m hoping I can get things in line for next year and give myself another shot to accomplish some of the things I haven’t yet.”