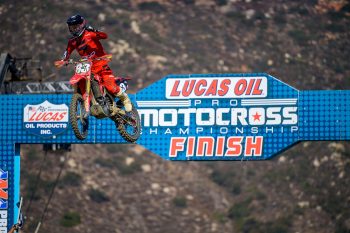 The future of Jett Lawrence has been secured despite the collapse of Geico Honda, widely expected to remain on red after winning Fox Raceway’s 250MX overall.

Lawrence, 17, confirmed that a deal has been completed for him to race-on in 2021, however, he stopped short of giving away any details.

Speculation mounting in Pala over the weekend has continually linked both Jett and brother Hunter to being aboard factory CRF250Rs next year as the powerhouse manufacturer looks to hold onto the pair that were signed to long-term deals with Factory Connection back in 2017 while competing in Europe.

That contract of the Lawrence brothers is understood to have originally been signed through the 2021 season with Geico Honda, which could make for a direct transition into Team Honda HRC should American Honda opt to take its downscaled 250 program in that direction.

“I’m not sure when, but we’ll obviously release something soon,” Lawrence confirmed. “I’m not gonna give you guys any details. I’ll let you wait till then and give you a bit of a surprise, but yeah, I’ll give you one hint… basically, it’s gonna have two wheels.”

Lawrence said on Saturday night that he will start Supercross testing on Tuesday in a quick turnaround toward 2021, which indicates that confirmation in regards to his future will be imminent over the coming weeks.

The Factory Connection-led Geico Honda team lost its title sponsorship with the insurance giant late this season and has been unable to lock in a replacement in time to commit to 2021. It brings to an end the world-class team that was initially formed in 1998.

It was a fitting send-off for Lawrence to not only win the final round of Lucas Oil Pro Motocross, but also for outgoing teammate Jeremy Martin to win moto two ahead of Lawrence and Jo Shimoda in a Geico Honda 1-2-3. The teenager said the team – co-owned by Rick ‘Ziggy’ Zielfelder and Jeff Majkrzak – will remain close to his heart in future.

“It sucks for the team cos there’s a lot of good guys behind the scenes,” he continued. “It sucks to see a truck leave the paddock, as most people said, and it definitely felt good to go 1-2-3 in that last moto. Jeff and Ziggy have been in this industry for so long and it’s a bummer to see them leave. They’re like a family to me, so will always stay in my heart for the rest of my career.”

It’s been an exceptional first full season in the professional ranks for Lawrence, claiming a podium in Monster Energy Supercross at Salt Lake City 5 and then delivering a consistent 250MX campaign for fourth in the final standings.