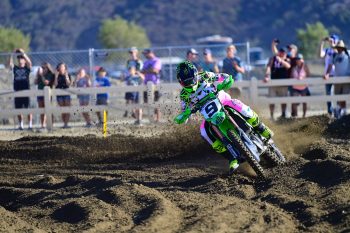 The series returned to Fox Raceway for only its fourth time in history, where both Kawasaki 450 class riders found success last year when Tomac earned first overall with his 1-1 moto scores and Cianciarulo grabbed first overall in the 250 class. Looking to continue that success, Cianciarulo kicked off the day by qualifying with the second fastest lap time of 1:54.025, while Tomac would qualify 11th with a time of 1:58.764, waiting for the motos to show his true speed.

Cianciarulo aggressively shot out of the gate aboard his KX™450 in Moto 1 nearly grabbing the holeshot and powered through the first turn in second. Unwilling to settle, Cianciarulo quickly made his move into the lead by Lap 4. Tomac found himself in seventh on the first lap, where he would begin to pick off riders each lap until reaching his teammate around halfway through the moto. The Kawasaki duo began to battle at the front and after leading for 13 laps, Cianciarulo surrendered his lead to finish second behind the three-time champion, Tomac.

As the gate dropped on the final moto of the season, Cianciarulo grabbed his sixth holeshot of the season to control the race from the start. Similar to the first moto, Tomac would once again find himself just inside the top-10 after the start with his work cut out for him. Laying it all out there, Cianciarulo led the 40-rider field for the majority of the race before making a mistake causing him to go down with six minutes remaining. The 450 class rookie quickly remounted, but would have to settle for third place in the moto and third overall (2-3). Tomac showed his strength as he was able to pass five of his contenders to finish fourth and earn second overall with his 1-4 moto scores.

The duo put both of their Kawasaki KX450 motorcycles on the box in the championship point standings as Cianciarulo battled at the front all season long to finish just 12 points shy in second, while Tomac was able to battle back from an early-season points deficit to finish third overall. The pair lead an impressive 150 laps of the nine-round series combined, leading to a third consecutive 450 class AMA Pro Motocross Manufacturer Championship for Kawasaki.

“Man, first off I want to say thank you to MX Sports for making this season happen, it was really cool to see everyone come together to make it through all nine rounds and it sure beats sitting at home on the couch. Next, I’d like to congratulate Zach (Osborne) on a hard-fought and well-earned championship this season. The competition was tough all year long and I’d like to think we put on a good show each and every weekend for the fans. We fell short of the goal this year of winning another championship, but we finished third overall in the series and I am proud of how my Monster Energy Kawasaki team never gave up. We’ll take about two weeks off and start getting ready for supercross.”

“What a year! My rookie year of racing was one I will never forget, not just because of the global pandemic and unique racing schedule, but more importantly, it has shown me that I belong in this class. I love this sport and as a kid dreamed of one day being up here competing against the best in the world. If you told me I’d be fighting for the championship in my rookie season and finishing second overall a couple of years ago, I would not have believed you. This sport has a way of kicking you when you’re down, but it’s about how you get back up and the people you surround yourself with. I truly believe that I have the best support system around me and a team and company in Kawasaki that has never stopped believing in me. I can’t thank them enough for that. My Monster Energy Kawasaki KX450 was a rocketship all season long and always put me at the front of the pack each moto to fight for the championship. I am already fired up and ready to get this sophomore season of racing started!”

In the 250 class, McAdoo surprised the crowd as he made a last-minute decision to race the final round with three broken fingers due to a crash sustained the previous weekend at Thunder Valley. McAdoo went on to lead the charge in the morning for Monster Energy/Pro Circuit/Kawasaki team as he qualified 10th with a 1:58.154 and Harrison following suit, qualifying 12th with a 1:58.975.

Moto 1 of the 250 class saw both Kawasaki riders rocket out of the gate aboard their KX™250 motorcycles and grab positions within the top-10. The duo rode consistently throughout the moto as Harrison grabbed sixth position and McAdoo in 10th, where they remained for the entirety of the moto and would go on to finish.

Similar to the first moto, McAdoo shot out of the gate in eighth in Moto 2, while Harrison ran into some tough luck, making it through the first turn in 19th. Acknowledging he had his work cut out for him, Harrison put his head down and got straight to work as he powered through the pack to cross the finish line in ninth for eighth overall (6-9). Meanwhile, McAdoo, who is known for his persistence, dropped a few positions but continued to push through the pain and finish 11th for a respectable 10th overall (10-11).

The Monster Energy/Pro Circuit/Kawasaki duo finished out the season both within the top-10 in the championship point standings with Harrison in eighth and McAdoo following by four points in ninth.

“Overall it was an alright day for me with an eighth overall. Getting to be a fill-in rider for one of the most elite teams in the paddock and racing under the Monster Energy/Pro Circuit/Kawasaki awning was a dream come true. I can’t thank Mitch, my mechanic Colter, and the entire team enough for taking a chance on me and giving me top-notch support from start to finish.”

“The final round is done and dusted. It was a tough race for me out there today as I didn’t even know if I was going to line up until today. We did everything we could with a pretty mangled hand and fought for 10th overall. I really feel like we made great strides this season with earning some of my best career moto and overall finishes. We will take some time to get healed up with the hand and then start testing for the 2021 season on our all-new 2021 KX250. We have heard nothing but amazing things about this new bike, so I am looking forward to the off-season.”