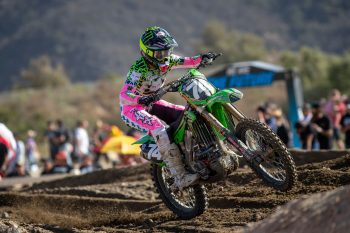 Pala, Calif. (October 11, 2020) – Monster Energy Pro Circuit Kawasaki’s Mitchell Harrison and Cameron McAdoo both ended the season on a positive note, finishing the Pro Motocross season in the top-10 at Fox Raceway. Harrison’s eighth overall (6-9) brought his total of top-10 finishes to six, while McAdoo’s 10th (10-11) gave him five. The duo of Harrison and McAdoo finished out the season eighth and ninth, respectively, in the championship standings.

The final round of the season is always high energy for the racers who want to end the season with a result they can be proud of. Harrison has been very consistent this year and was able to produce the same kind of results in California. The opening moto saw Harrison in a good position, starting the race in sixth. With the track being more one-lined, he didn’t have a lot of opportunities to move forward and finished the moto in sixth.

His hope of another good start didn’t come to fruition, rounding the first lap of Moto 2 in 19th. Harrison used the entire moto to make passes despite the one-lined nature, making his way eventually into ninth. His 6-9 awarded him eighth overall.

“The field in this class is stacked and while we didn’t get it up the podium, we stayed consistent all year,” said Harrison. “That’s something we can be proud of as we go into the off-season. I’m very honored that the team chose me to help fill the shoes of some very fast guys.”

Even with three hurt fingers in his hand, McAdoo knew he wanted to give it a try to race on Saturday. While not 100 percent, that didn’t stop him from giving it his all and it showed on the track with two solid results. His start in Moto 1 helped him find his flow on the track, maintaining his 10th place from start to finish. In the second moto he produced another great start, on the edge of the top 10. McAdoo continued to hold on and came away with an 11th for the final moto. His 10-11 placed him 10th overall.

“I was really happy that my hand was not as bad as originally thought and I was able to line up for the final race,” said McAdoo. “We weren’t even really sure how today was going to go, so to get a top-10 is a nice way to end the season. I’ll be making sure my hand heals properly so we can start working hard in the off-season to be a threat in 2021.”