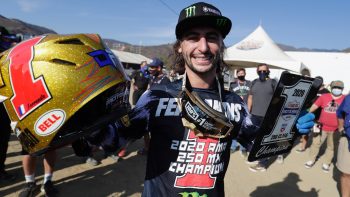 Monster Energy Star Yamaha Racing’s Dylan Ferrandis’ dream of becoming a motocross champion of U.S. soil has come true for the Frenchman, clinching the Lucas Oil Pro Motocross 250MX Championship on his third-place overall (2-5) at Fox Raceway in Pala, California. The championship caps off a stellar season for Ferrandis who also earned his second-straight 250SX West title earlier this year. Shane McElrath finished just off the podium in fourth overall with a 5-4 result and claimed the team’s 14th holeshot of the season in Moto 2. Rookie Jarrett Frye grabbed his best finish of the season in sixth with an 8-6 tally. Just outside the top-10 was the other rookie Nate Thrasher in 11th (12-10). Justin Cooper finished third in Moto 1, but was unable to start Moto 2 – giving him 12th overall.

The Frenchman had an 18 point advantage entering the final round of the season. While he didn’t have to win, Ferrandis put in two fast motos to seal the championship and finish his 250 career in style. In Moto 1, he grabbed a great start in third and held the position for most of the moto. With the track one-lined for most of the circuit, he was able to get into second with a few laps to go but unable to sneak by for the win. He didn’t get the start he was hoping for in Moto 2, but knowing the championship was within his grasp, Ferrandis put in a smart moto to finish fifth and claim his first Lucas Oil Pro Motocross Championship.

It was a solid final round for McElrath who closed out the year third overall in the standings 250MX Class. His consistent performances helped him throughout the year, including a fourth overall in California. In Moto 1, it was McElrath who was right behind his teammate, nearly grabbing the holeshot. As the riders settled in, the North Carolinian was fifth, and he maintained that position until the checkered flag. Moto 2 saw McElrath claim the final holeshot of the season. He held onto the lead for a few laps before making his mark just outside the podium in fourth and ending the day fourth overall.

It was a day of improvements for Frye, who claimed the best finish of his career in sixth overall, and it happened thanks to two great starts. In Moto 1, he got inside the top-10 right away and made moves forward to claim eighth overall. Moto 2 saw Frye third after the opening lap and was able to hold onto his best career moto finish in sixth, awarding him sixth overall on the day.

The other rookie Thrasher who has only completed four motos in his pro career grabbed his best moto finish of the season. Starting the day just outside the top-10 in Moto 1, Thrasher was 11th after the opening lap, finishing out the moto 12th. In the second moto he was able to move forward after the start, claiming 10th and 11th overall on the day.

Coming off his first overall win of the season, Cooper was obviously feeding off his victory in Colorado at the final round. He grabbed the Moto 1 holeshot and was putting in a fast pace for the race. Cooper led the first half of the race, ultimately finishing third. As the riders went out on their sight lap for Moto 2, Cooper encountered a technical issue, ultimately forcing him to cut his day short. However, his 3-DNS was good enough for 12th overall.

“It was a heck of a day for us! We capped off an amazing year for the entire team with the 250MX Championship! I’m thankful for everyone involved, our riders, our crew, and our sponsors. Everyone works so hard and that hard work paid off.”

“Winning this U.S. motocross championship is another dream goal accomplished. I really put a lot of work to get it and it was not easy at all. To finish my 250 career with the supercross and motocross championship the same year is so big that I never imagined myself to do it. It’s so awesome. I’m feeling in paradise right now.

“It was good to race in California close to home. Unfortunately, the track was really tough to ride. I felt strong in Moto 1 and got P2 to put myself in a safe position for the championship. In the second moto, I had a small tip over and was ninth. I came back then rode easy at the end to enjoy those last laps in my 250 career.”

“I’m glad to be finished racing for the year. It’s been a very long year, but it’s also been the best year of my career. I’ve loved my Yamaha all year long and I’m looking forward to what’s next!”

“It was a good way to end the season with my best race of the year. I felt good all day qualifying sixth and finishing 8-6 in the motos for 6th Overall. I had a lot of fun these last four races, and I’m pumped with the progress I made each race.”

“My day went pretty good overall. I had top-10 starts in both motos. Unfortunately, in my first moto, I got a flat front tire and salvaged what I could to end up 12th! In the second moto, I broke the top 10 to end the day 11th. These past two races have been awesome. I’m looking forward to this offseason with the team and putting in the work to come out swinging next year!”

“It was a really good day for me. I just wish I could have given it my all for the last race of the season. It’s definitely not how I wanted to end it, but that’s racing. We will just have to wait for the Supercross season to roll around so we can get back to where we want to be.”