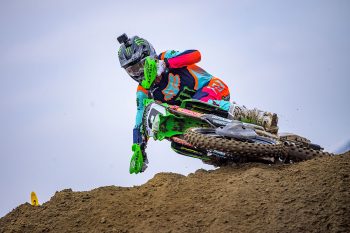 Adam Cianciarulo will undergo an arthroscopic procedure on his troublesome wrist in order to clean up any damage that has affected him since the early stages of Monster Energy Supercross.

Cianciarulo claimed second in the Lucas Oil Pro Motocross Championship in his rookie year on the KX450, but will now take the time to have his wrist assessed to enter 2021 at 100 percent.

“This week I’m in California still and I actually, if you guys remember, back around Oakland time I’ve been complaining about my wrist,” Cianciarulo said. “I don’t know… there’s something. I’m going to have to get my wrist scoped, just cleaned up a little bit. It will basically be a couple of weeks off, just some scar tissue built up.”

Cianciarulo is only expecting a short period off the bike before resuming testing alongside Monster Energy Kawasaki teammate and defending 450SX champion Eli Tomac early next month at the team’s factory testing facility in California.

It’s the hard-pack tracks where Cianciarulo has found his wrist most problematic, making for a difficult Pro Motocross final round at Fox Raceway, in which he placed third overall, but more so causing greater concern in the environment of Supercross.

“On any type of hard tracks, especially Supercross tracks with two sets of whoops, it’s been super-difficult for me to hold onto the handlebar,” he added. “This weekend it was absolutely horrendous, cos it was so hard and choppy – it was pretty brutal. So, I’m gonna get that cleaned up.”