Career-best 450MX performance of Craig just short of round podium 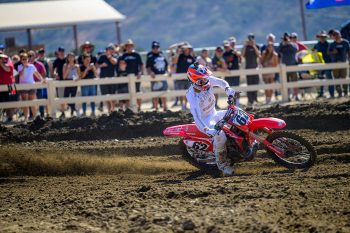 A career-best performance in 450MX from Christian Craig at Fox Raceway marked a fitting send-off for the longtime Honda rider, who will be switching manufacturers now that Lucas Oil Pro Motocross has concluded.

Craig, 29, has been in phenomenal form during the latter portion of the 450MX season, going 4-2 in Pala aboard the Team Honda HRC CRF450R, but surprisingly finishing just short of overall podium in fourth overall.

In his first full season since 2017 in the premier class outdoors and as the replacement of Ken Roczen at late notice, Craig claimed sixth in the final championship standings directly behind high-profile Honda signing Chase Sexton. Next year’s works Honda team will be Roczen and Sexton.

“This weekend was great,” Craig said. “Pala is my home track, so I knew I was going to be up front and be comfortable. I started off qualifying third, which was my best all season. In the first moto I made my way up to fourth and then third at one point. After that, Chase [Sexton] got me with two laps to go, so I was pretty frustrated with that one – I almost got that moto podium and ended with fourth.

“In the second moto I came out second, which was my best start all season, so that was nice. I followed [Adam] Cianciarulo around for a while and got close, but Chase was on a mission. He caught us both, passed me and was on Cianciarulo, then Cianciarulo fell, so me and Chase just rode it in for first and second. I ended 4-2 for fourth overall, unfortunately, but got my first moto podium ever in an outdoors series, especially in the 450 class, so we’ll take it. It was a super fun season and I’m looking forward to next year.”

Craig continues to be linked to a prized seat at Monster Energy Star Racing Yamaha in 2021, slated to step back to the 250 category in both Monster Energy Supercross and Pro Motocross next season. Nothing has been made official by he or the team at this point.