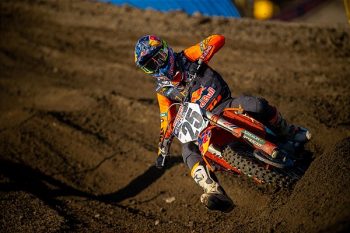 The 2020 AMA Pro Motocross Championship concluded on Saturday in the heart of Southern California’s motocross industry with the Fox Raceway National, where Red Bull KTM Factory Racing Team’s Marvin Musquin earned a top-five overall finish in the 450MX class to round out the season fourth overall in the championship standings.

In Moto 1, Musquin got off to a great start aboard his KTM 450 SX-F FACTORY EDITION and he battled for the lead for the first seven laps. Just before the halfway mark, Musquin made a mistake that sent him off the track and he dropped from second to sixth as he fought to make his way back onto the track. He charged in the final laps to ultimately secure a sixth-place finish in the first moto. In Moto 2, he got off to a fourth-place start and battled just outside the podium for a majority of the race. With four laps to go, he got passed by a hard-charging Eli Tomac and he brought it in for fifth in the second moto. With 6-5 scores on the day, Musquin secured a top-five overall at the season finale.

Marvin Musquin: “It’s good to be here and to see that the season happened. For me, I got lucky that we started the season later in the year because I had a big knee surgery done in December and it took me a very long time to come back. It was a tough season, I ended up fourth overall so I’m disappointed on my last three rounds but I gave my best and at least I was behind the gate and trying to battle. It was definitely a big challenge for the last three rounds after having two big crashes but I’m glad I finished the season. I’m ready for a break but I’m looking forward to coming back healthier for supercross.”