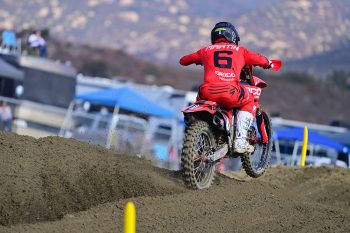 Martin, who went 4-1 for second overall at Fox Raceway’s final round of the season today, has officially confirmed he won’t be Honda-mounted next year.

Reports from Pala suggest that the decision has been made that Factory Connection will pull out of competition after losing longtime title sponsor Geico, however, the team is yet to make any formal announcements.

PulpMX has linked Martin to Monster Energy Pro Circuit Kawasaki after the iconic squad has endured a nightmare campaign this year, struck by injuries during Monster Energy Supercross and having to call in a series of replacement riders during the season.

It’s understood that the Lawrence brothers, Jett and Hunter, will remain with Honda to lead a factory 250 program next year, potentially from within the works Team Honda HRC effort. It’s unclear where the remaining team riders will end up, aside from Christian Craig being heavily associated with Star Racing Yamaha.