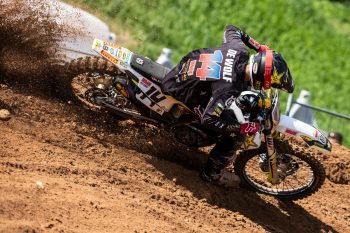 Dutch teenager Kay de Wolf will move up to the MX2 World Championship from 2021 in a two-year agreement, set to remain at Rockstar Energy Husqvarna on-board the factory FC 250.

De Wolf will continue with the Nestaan MX-operated Husqvarna MX2 team, which he currently sits third in the EMX250 standings this season.

“It’s amazing,” the 16-year-old commented. “I’ve had a great two years with the team already and, signing for two more, moving into the MX2 class with them is a great feeling.

“I’ve been with them for EMX125 and at the moment EMX250, so staying with the same team as I move up to MX2 means I can fully focus on my racing. It’s just unbelievable and a dream come true for me. Knowing that the team believes in me gives me confidence and I hope to repay them with great results over the next two seasons.”

In the EMX250 ranks, de Wolf’s place will be taken by 14-year-old Maxime Grau, who has also signed with Rockstar Energy Husqvarna for the next two years. He’s currently second in the Championnats De France Junior series.

Rockstar Energy Husqvarna MX2 team manager Rasmus Jorgensen stated: “With Kay it’s more of an extension as he’s been with us for two seasons already. We have a huge belief in him, so we have signed him for two more years.

“Obviously, he is really young, he’ll only be 16 next season, so year one in MX2 will be a learning year without any huge expectations. We just want to see him have a strong year, improve and for him to experience what it takes to be up front in the MX2 class for the following season.”