Factors to consider during the final round of the 2020 season at Fox Raceway.

After two months of intense racing, the 2020 Lucas Oil Pro Motocross Championship will finish with fireworks at Fox Raceway in Southern California this weekend. Both the 450MX and 250MX titles are still on the line in what’s been an unpredictable championship with multiple plot twists. As we head towards the finale on Saturday, here’s our take on the biggest talking points of the series in recent weeks. 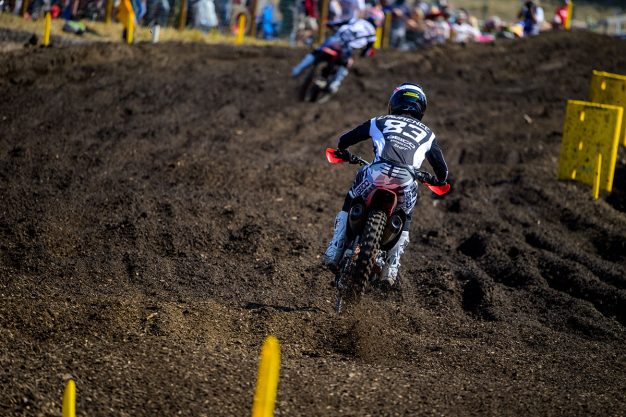 7. Jett Lawrence vs Cooper:
A verbal stoush broke out between Monster Energy Star Racing Yamaha’s Justin Cooper and Geico Honda’s Jett Lawrence after Cooper brought his pet dog onto the podium to celebrate his win at Thunder Valley. Lawrence was outspoken in his belief that it was unprofessional and the public social media banter between the two 250MX racers quickly got borderline personal. Whether or not the war of words transpires into an emerging rivalry on the track will be something people monitor with interest this weekend.

6. Late form of Tomac:
Three-time 450MX champion Eli Tomac’s season certainly hasn’t gone to script outdoors. A double DNF at Loretta Lynn’s 2 round threw a huge spanner in his dreams for a four-peat and, from then, the Monster Energy Kawasaki racer hasn’t been able to regularly slice through the pack with the same authority he had in the past. That could also point to the possibility that the rest of the field has caught up to the raw speed he’s always possessed. Still, Tomac has started to find his form and claimed the overall at Thunder Valley last weekend with a 3-1 scorecard. However, with a 47-point deficit and just 50 points up for grabs on Saturday, he’s going to need a monumental helping of luck to add the outdoor championship crown to his trophy cabinet in this shortened nine-round series.

5. Rise of the rookies:
2020 has seen something of a changing of the guard in the 450MX class, with Adam Cianciarulo (Monster Energy Kawasaki) and Chase Sexton (Team Honda HRC) stepping up to the plate and making a name for themselves in their first year racing the premier class. AC broke through for his first race win at RedBud 2, then continued his run of form with a double-moto victory at Millville the weekend after. The Florida native might’ve finished off the podium in his home round at WW Ranch, but he made amends on Saturday with a 1-3 result to finish second to his teammate Tomac. He’s second in the standings, just 24 points behind Osborne. Meanwhile, Sexton might not have won any races, but he’s quickly picking up the pace and required race-craft in the 450s. He finished second to Cianciarulo at the opening race at Thunder Valley and has three third-place moto results to his name, so of course, both these guys have a bright future ahead of them.

4. The near-misses of Thunder Valley:
Boy, were there some wild moments at Colorado on the weekend. Whether it was Justin Barcia’s two miraculous saves (one ‘flying W’ and one near high-side), Dylan Ferrandis’ scary two-wheel-drift-to-scrub-to-euro-whip over the big roller or Cianciarulo’s four near misses (including a last-ditch effort to pass championship leader Osborne in the closing stages of the second race), the number of heart rate-escalating moments at Thunder Valley was one of the highest we’ve witnessed in a day’s racing. With the race being held four months later than usual, the differing dirt and lighting conditions were most probably the two biggest factors as the day wore on, making the close racing even more entertaining. 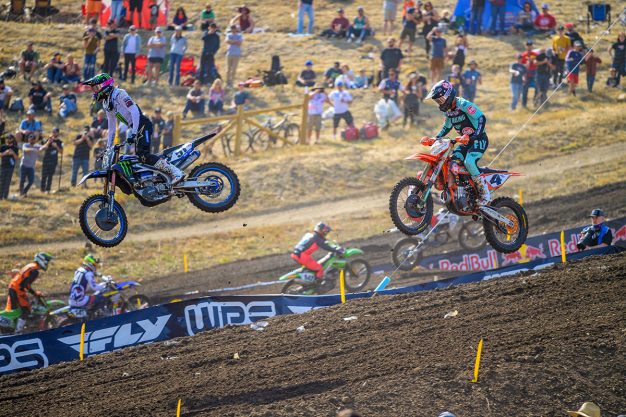 3. Last call:
For a large number of riders, this weekend’s finals are the last chance to show teams what they’re capable of, if they want to pick up a ride next year. Justin Barcia is the biggest name whose contract with Monster Energy Yamaha expires, but he’s been strongly linked to the new Troy Lee Designs-run GasGas factory team. Other riders who will be desperate to put in an eye-catching performance in particular include Joey Savatgy (currently JGRMX Yoshimura Suzuki), Broc Tickle (Monster Energy Yamaha, filling in for the injured Aaron Plessinger) and Justin Bogle (Rocky Mountain ATV/MC KTM WPS). On top of that, Monster Energy Star Racing Yamaha rider Shane McElrath is jumping from the 250MX class to the 450MX field in 2021 and has yet to be linked to a team, while there’s also much uncertainty that surrounds Geico Honda with the team’s title sponsor due to depart. There’ll be a lot to play for this weekend.

2. Ferrandis draws closer:
From the first gate-drop at Loretta Lynn’s, the 250MX class has been an enthralling battle this year, with the sheer speed of Ferrandis pitted against the consistency and fast-starting prowess of Jeremy Martin (Geico Honda). Over the past three rounds, the French rider’s starts have improved and, as a result, he’s taken away one of Martin’s key weapons against him. The difference is starting to tell in the points, too, as Ferrandis has now stretched out an 18-point buffer over Martin heading into the final round. It’s enough of an advantage to be able to manage, but Ferrandis still can’t afford any mistakes. Meanwhile, the battle for third in the series is a tight affair, with just three points separating Ferrandis’ teammates McElrath and Cooper. Regardless of how they end up, it’s very possible that Star Yamaha will lock down three of the top four places in the championship.

1. Osborne on the verge:
Rockstar Energy Factory Husqvarna Racing’s championship leader Osborne is on the cusp on claiming the premier 450MX championship for the first time. With the exception of a bobble at Millville where he battled a flat front tire in second race, Osborne’s been a model of consistency this year. Now holding a 24-point lead over Cianciarulo, he just needs to keep it upright and out of trouble to wrap up the championship. Even if he places top three in the opening race, but still finishes ahead of AC, he’ll wrap up the title with a moto to spare. Incidentally, at 31, Osborne might well be the oldest racer to ever claim a maiden 450MX outdoors title if he’s successful this weekend.