Shoulder surgery on the cards for Cooper after Pala

Long-term injury near certain to be repaired in the upcoming off-season. 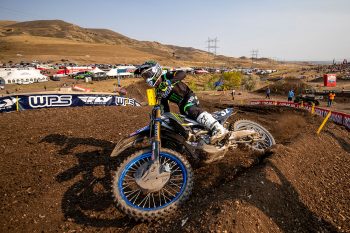 Monster Energy Star Racing Yamaha’s Justin Cooper is near certain to undergo surgery on a troublesome shoulder at the end of Lucas Oil Pro Motocross in hope of being 100 percent for 2021.

The 23-year-old said following his first win of the season at Thunder Valley that he plans to undergo an operation on his shoulder after experiencing ongoing problems.

“If I’m going to be honest, I think the plan for me is to get surgery right after Pala,” Cooper revealed. “I’ve had a pretty banged up shoulder. I had an AC joint separation, so that’s been bothering me.

“It’s at the point – I had a previous surgery on it – but it’s at the point where it’s just not feeling right, so I might just get that quickly fixed up. I feel like now is a good time to do it, since we don’t know what’s going on for next year yet.

“It shouldn’t be too long off the bike and we’ll get back into the swing of things when I feel healthy enough to do so, but as of right now, I think that’s going to be the plan.”

Cooper has been dealing with the injury for two years since initially hurting it at the Houston round of Monster Energy Supercross in 2018 and then further damaging it in a clash with Jeremy Martin at Muddy Creek that same year.

“I had a crash in Houston 2018 in Supercross and that put me out for the rest of the Supercross season and I ended up doing the Pro Motocross championship that year,” he continued. “Obviously me and Jeremy came together at that one round.

“I ended up getting hurt there too with my shoulder and it hasn’t been the same since, so I’m going to try and get it fixed up. It’s a bummer, but we all deal with this kind of stuff, so I hope to be back soon.”

Cooper is now in the mix for third in the 250MX championship standings, currently fifth entering Fox Raceway’s finals this Saturday. It remains unclear when the 2021 Monster Energy Supercross season will commence.