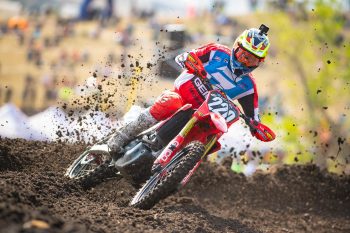 “Today, 4-2 for third overall,” said Martin. “Not super stoked on that. I had a really good jump out of the gate in moto one. Straight up, some of the guys went right around me. I don’t really know what happened there. I executed my shifts and everything pretty good. Then it was just a dog fight, really. The whole first moto I was just trying to catch the blue bikes. I inched up on Shane [McElrath, third place] a little bit but I’d get up on him a little bit and then he’d sprint and kind of get away. Moto two we made a change with gearing and it just helped a ton out of the gate. I got off to a really good start. I tried to definitely get in on Justin [Cooper, moto winner] there, but he was riding really well. I thought maybe I could get him early, but he started to kind of catch onto some of my lines. Then I just threw a couple good little efforts at him and he rode well. I just didn’t have anything there and that was it.”

Hunter Lawrence went 5-4 for fifth overall. The Australian has shown steady progress since a shoulder injury suffered at round two.

“For sure, it was definitely a better day today,” said Lawrence. “Obviously the year kind of sucked for me, I haven’t had much races up the front like today just due to starts and stuff like that and my shoulder not being 100% there. But it was good. We had two pretty decent starts. Just feeling more and more like myself. Hopefully we can put in a good two motos at Pala and we’ll see how we go.”

Jett Lawrence’s quest for an overall podium continues, he took sixth with 6-6 scores.

“Good riding this weekend but just had a bad qualifying time, and that gave me a bad gate in Moto 1,” said Lawrence. “I got a good start but I was on the outside. Made my way to sixth then saved a big mistake. I lost two positions but got back to sixth but my brother Hunter was too far to catch up to. Second moto I spun in the gate so I was starting the moto from outside 20th again. It took me awhile to get my lines down but once I did I started clicking off good lap times and made my way up to sixth with a last-lap past. So I was pretty consistent but I just need to sort my starts so I can start up front and make my life easier.”

Shimoda, still in his first full season, went 7-8 for seventh overall. That’s his fifth top-ten in the last six races.

“In qualifying [session] 1 I felt loose right away and built my lap time toward the end for p11,” said Shimoda. “Qualifying 2 I was running third for a while but as the track was getting packed in, on the last a couple laps guys went faster. In Moto 1 I had an okay start, around ninth, put some good laps in and made some passes, but I got passed on last lap for seventh. Moto 2, 15th place start but made some quick passes in the second turn and was running 11th . I got contact with Alex [Martin] and went back to 12th, but I was able to catch up to 8th for 7th overall.”

Carson Mumford followed his season-best ninth from last week with 10th overall in Colorado, via 13-11 scores. He had only visited the Thunder Valley track once before, back in his amateur days on 85cc bikes. The rookie admitted the altitude got to him, but he fought through it late in the second moto.

“I felt terrible in the second moto in the altitude because I have asthma,” said Mumford. “Two bad starts, too. I’ve been feeling really tense for the first 10 minutes of the first race, not sure exactly why. Maybe just because these are new tracks for me, or racing as a pro in front of the fans, or maybe because fans I’m starting in 35th! Not sure. It shouldn’t be an issue this weekend for Pala, I’ve ridden that track since I was eight years old. I’m definitely feeling better each week. I wish the season was longer because I’m loving it and I really want to do good!”

Only one race remains in the shortened 2020 pro motocross season. Fox Raceway in Pala, California will host the season finale this Saturday, October 10th.