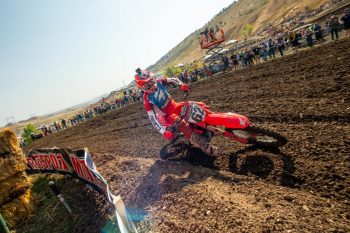 Confronting the track’s mile-high altitude, Sexton completed moto one’s first lap in second place, and that’s where he stayed for all 16 laps, hitting the checkered flag less than three seconds behind winner Adam Cianciarulo. Moto two saw him in ninth after lap one, but he advanced steadily until lap 11, when he reached his finishing position of fifth.

Craig enjoyed one of his best races yet in Colorado, finishing in the top five overall. He was hampered by a poor start in the first moto, but he made some good passes to finish seventh. In the second outing, Craig had a decent start and was up to fifth in just two laps. Three laps later he advanced to fourth, his eventual finishing position.

Chase Sexton:
“Round eight in Denver was pretty good. In the first moto I ran behind Adam [Cianciarulo] and tried to make a push for the win and ended up second, which was my best moto finish so far. I had a really good start in the second moto and finished fifth; I didn’t ride as well as I wanted but ended with fourth overall, so still top five. We’re making improvements.”

“The day started off good in Colorado. I qualified fourth, which was one of my best of the year. I felt good on the bike and on this track, so I went into the motos pretty confident. Unfortunately, I got off to a bad start, which has kind of been my story all year; I had to make some passes and got up to seventh, tagging along with [Marvin] Musquin for the whole moto pretty much. In the second moto, I got off to a better start, top-five off the line. I battled with some guys, made a couple passes and ended up fourth. It’s exactly what we’ve worked for. Obviously, the ultimate goal is to win, but to improve is what we look for every weekend. I ended up with 7-4 for fifth overall and am headed to the final round ready to go.”

“Overall it was a good day for the team, with the cooler weather and hard-packed track conditions in Colorado. Chase and Christian showed good speed all day to realize our goal of putting both riders in the top five overall. Chase was a strong second in the first moto but tangled with another rider on the start in moto two, although he still managed a fifth-place finish for fourth overall. Christian was consistent and posted his best overall 450MX finish in this series so far.”