Suzuki moves up in AMA MX points at Thunder Valley 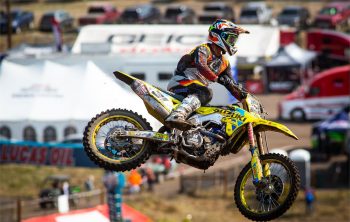 JGRMX/ Yoshimura/ Suzuki Racing’s Alex Martin brought his RM-Z250 home just shy of a top 10 overall finish but sits only 12 points out of third place in the points standings with one round to go. And although JGRMX 450cc veterans Fredrik Noren and Joey Savatgy ran into some tough conditions, BarX/ Chaparral/ Fly/ Suzuki Racing rookies Dilan Schwartz and Preston Kilroy got some fast pro moto laps under their belts.

Anstie pulled out a heroic second moto performance, this time on a hardpack and rutted track. The winner of last weekend’s award for making the most passes in a 450cc moto made it easier on himself by eliminating first lap mistakes. After a strong finish in moto one, Anstie crossed the moto two holeshot line inside the top three. The battle was on from there and “Mad Max” was fast and smooth on a track that forced mistakes from other riders.

Said Anstie: “It was a solid day. We got better in each session and had a strong couple of motos. I’m pleased with how my crew managed to make the bike competitive up at altitude and especially with it being our first time there. I’m looking forward to Pala.”

JGRMX’s Alex Martin started mid-pack in moto one but put on a ferocious charge. By the mid-point of the race he’d breached the top 10, but a late crash put a great finish out of reach. He had a better moto two with a top-10 start and some exciting battles up front, but two-thirds of the way into the moto “A-Mart” ran into a problem and dropped back slightly. His finishes were good for eleventh overall; he remains in the top five in points.

Said Martin: “I had some rough luck this weekend in Colorado. I tangled with another rider off the start in the first moto and made a couple more mistakes throughout the day. I’m looking to make a strong comeback at the last race in Pala next weekend and get back into the top three in the championship.”

The JGRMX 450cc riders had high and low moments throughout the day. Fredrik Noren started just outside the top ten in moto one. He worked his way inside it and held the spot nearly until the flag. Moto two saw Noren in 39th place after a tumble on the start straight. “Fast Freddie” put the hammer down and worked his way up to 13th before the flag flew – replicating Anstie’s feat from the prior weekend.

“I’m more comfortable but I’m not finishing in the results where I feel like I should and can be.” Noren explained his moto two challenge, “In the second moto I had a crazy start crash. I’m glad I didn’t get hurt in it. I was able to get going and back to 13th place, which was good. I’m looking forward to Pala next weekend to finish the season strong!”

Joey Savatgy had to cope with a bad start in moto one that saw him clawing his way forward before he had to retire from the moto. Although “Versace” was not able to line up for moto two, he, fortunately, had enough of a points cushion to remain inside the top 10 in season points.

Said Savatgy: “It was another tough weekend. A practice crash put a halt to my weekend. I tried to go racing anyway but couldn’t hold on with my feet so I shut it down.”

“It was a tough day for us.” Jeremy Albrecht summed up the day for the JGRMX team. “Martin rode good in moto one but went off the track and then had a crash. Moto two started off good for him but unfortunately didn’t finish well. Freddie had a good first moto. He rode well in moto two but crashed on the start so he had a lot of ground to make up. Joey tweaked his ankle in practice and then again in the race and he could not finish. He sat out moto two to ice the injury and hopes to be back at Pala. We are looking forward to next weekend to finish out the series strong.”

BarX/ Chaparral /Fly /Suzuki Racing’s Dilan Schwartz, who earned his first AMA Pro Motocross points at the opening round in the 250cc class, returned for an outstanding second appearance. Schwartz gave the type of performance young racers dream of; a top 10 start kept him rubbing elbows with seasoned racers in and out of the top 10, finishing the moto with a solid finish. More points from moto two put him well inside the top 15 on the results sheet.

“Colorado was a step in the right direction. I got a good start in moto one and put together a solid moto getting tenth place.” The rookie Dilan Schwartz explained it like a seasoned pro, “In moto two I didn’t get the greatest start but came from the back to finish fifteenth. I’m happy with the bike and the team and I’m excited to give it our all next weekend at Fox Raceway.”

Another 250 rookie on the BarX team, Preston Kilroy made his AMA Pro Motocross debut and impressively came away with points in both motos. His first pro lap scored him in 18th, and 16 laps later a steady ride had earned him a top-15 finish for his debut moto. Moto two’s top 20 finish was good for a couple more points and capped a great introduction to the pro ranks.

“After Loretta’s I knew Larry and the team had my bike dialed so I wanted to see where I stood,” Said Kilroy after the event. “I set a top 20 goal for Thunder Valley and finished with a 17th overall. I’m excited to work on improving that next weekend at Pala.”

The final round of the Lucas Oil Pro Motocross Series takes place on Saturday, October 10th at Fox Raceway in Pala, California. The Suzuki teams and racers will make their final push for strong finishes, including JGRMX’s Alex Martin’s quest to make up 12 points and finish the year inside the top three of the 250MX Class.