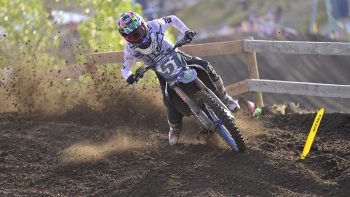 Monster Energy Yamaha Factory Racing Team’s Justin Barcia and Broc Tickle both collected solid Moto 1 finishes but unfortunately had issues in Moto 2 to finish outside the top 10 at Round 8 of the Lucas Oil Pro Motocross Championship in Lakewood, Colorado. Barcia started the day strong, running inside the top five, but didn’t finish the second moto to score 12th overall (5-37). Tickle returned to racing in Lakewood, and after a solid showing in Moto 1 with a 10th-place finish, but had a technical issue early in the Moto 2 to finish 17th overall (10-39).

The hard-packed track was constantly changing and challenging riders all day. Barcia came out swinging in the opening moto, starting in fourth and staying with the lead pack. He held onto fifth and was ready to round out the day with a strong second moto. In Moto 2, Barcia was again inside the top-10, but just after halfway went down and was unable to continue. He was credited 37th and finished the day 12th overall.

Tickle was back under the tent in Colorado, hoping to produce a good finish for the team after taking the weekend off in Florida after his big crash in Millville. He grabbed a solid start in 13th and was moving towards the top 10. He wanted the top-10 in a bad way, making a last-lap pass for 10th. In the second moto, Tickle got off to a great start in fourth going into Turn 2 and was sitting 10th at the end of the first lap. Unfortunately, his hopes of another top 10 finish were quickly derailed with a technical issue, forcing him to retire early.

The Monster Energy Yamaha Factory Racing Team is ready to round out the season on a good note at the final round of the Lucas Oil Pro Motocross Championship at the Fox Raceway in Pala, California, on Saturday, October 10.

“It was a tough day today for the Monster Energy Yamaha Factory Racing Team. In the first moto, Barcia got a good start and finished fifth, while Tickle worked his way through the field for 10th. In Moto 2, it was Tickle with a good start. However, a technical issue ended his race early. Barcia, who was running sixth, had a hard crash late in the race and was unable to finish. We will move on to the final race next weekend in Pala, California, and work to end the season on a high note.”

“It started out to be a great day but didn’t end well. I really was happy to be up front with the group in the first moto. The track was tough, but we were able to get a good result. The second moto was even tougher and I ended up going down and wasn’t able to keep going. I’ll work on getting back to 100 percent this week so we can end the season strong.”

“I think overall, it was a positive day for myself. That big crash at Millville set me back, and I missed WW Ranch. My starts were a little better today. The first moto was better than what I have been on the start, but I would say my riding wasn’t the best. I finally found a flow about halfway through and started clicking off some decent lap times as the track deteriorated. I ended up getting 10th, which wasn’t what I’m looking for, but it was an okay finish for the circumstances. Going into the second moto, I knew the track was going to deteriorate even more, which I normally strive and thrive in. I went out there and came close to the best start I’ve had all year. I was able to be close to the top 10 on the first lap, but unfortunately, I had to pull into the mechanic’s area and sit the second moto out. So all in all, like I said it was a positive day and good to be back at the races, but it’s kind of a bummer to miss out on some more points. We’ll come back at Pala and work to get back into the top 10 in the championship.”