Cooper gets his first overall of the season in Colorado 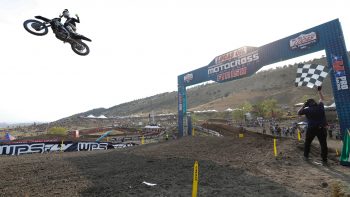 Monster Energy Star Yamaha Racing’s Justin Cooper came into the penultimate Lucas Oil Pro Motocross round at the Thunder Valley MX Park with a win as the goal. It came to fruition for the New Yorker who finished the day on top with a 2-1 moto score. The 250MX points leader, Dylan Ferrandis, maintained his points lead with only two motos remaining this season, following a 1-3 moto result for second overall. Shane McElrath was a fixture at the front, finishing the day with a 3-5 to end up fourth overall. Rookie Jarrett Frye earned a career-best finish inside the top 10, scoring ninth overall on a 9-10 moto score. The newest member of the team, Nate Thrasher, had a solid result in his pro debut, bringing it home in 13th overall (11-16).

The altitude of Lakewood, Colorado, is always the biggest hurdle that riders need to overcome at the Thunder Valley MX Park. Cooper didn’t seem to have any problem with the thin air as he grabbed the second overall win of his career. In Moto 1, he was right there at the line for the holeshot but was pushed back to fourth on the opening lap. He quickly moved into third and would make his way past his teammate McElrath into second by Lap 8. Moto 2 started with Cooper grabbing the holeshot and defending the lead for the entire 30 minutes plus two laps, giving him the overall.

The points leader Ferrandis started the day with a dominating performance in Moto 1. After taking his time, he passed McElrath a few laps in and ran away with the win. He had an uphill battle in Moto 2 after starting outside the top-10. He would pick off riders on the hard-packed track but then had a tip over. Ferrandis quickly regrouped and managed a third-place finish for second overall.

McElrath continued his streak of great starts, opening the day out front. He led the first three laps before Ferrandis made the pass. He would eventually finish third on the moto. The North Carolinian grabbed another great start in Moto 2, starting in second. Running with a fierce pace, McElrath would keep up the speed and would cross the finish line in fifth, giving him fourth overall on the day.

Coming off two solid finishes, Frye was ready to take advantage of the Yamaha power at altitude. He did just that as he came away with his best finish of the season. In Moto 1, Frye rounded the first lap in ninth and was able to keep it in the top 10 for the entire moto, crossing in ninth. The second moto saw the 19-year-old run up front early with his teammate, coming around in fifth. He kept it on two wheels, pushed all race long, and came across the line 10th for ninth overall.

The goal for first-timer Thrasher was to stay healthy and run two solid motos. He did just that at a challenging race track where he finished inside the top-15 in his debut. Moto 1 saw the young gun start in 15th and make his way forward, finishing the race in 11th. The second moto was more of an uphill battle as he started 20th. Thrasher didn’t give up the entire race and ended up 16th for the moto, scoring 13th overall – a great start to a career for the 17-year-old.

The Monster Energy Star Yamaha Racing team heads to Pala, California, for the final round of the Lucas Oil Pro Motocross Championship at the Fox Raceway, on Saturday, October 10.

“It was a great day for us, another points-building race with Dylan getting second overall. I’m also stoked to see Justin get an overall win. He’s been working so hard for this after his injury in the preseason, so it’s great to see him back on top. It was a really good weekend for the entire team. I’m so proud of all of our guys. We’re looking forward to the finale next weekend in Pala.”

“It was a good weekend for myself and the team. We got a win under our belt, and it feels dang good! I felt comfortable all day. I came here looking for this win, so I’m glad to put it on the top step. We’re focusing on finishing this season out strong. Not much more to say except that I am just so stoked on the day!”

“We had a perfect Moto 1 with a good start and took the win. It was a completely different scenario in Moto 2. I had a bad start and a crash and then had to come back from behind. The track was tricky today. I’m happy to leave with second overall and gain some more points before the finale next week.”

“It was a pretty good day for me today overall. We were just shy of a podium, but huge improvements were made. I’m excited about the progress we are continuing to make on the bike for the rough tracks. We will be ready to give it everything at the last round!”

“It was a good weekend for me. There were a lot of positives to take away from today, including my best result so far. We are getting better each weekend. I’m looking forward to finishing out the season strong next weekend.”

“It was a solid day for me to get my first Pro National under my belt! I had pretty good speed all day. I just needed to clean up a few things. I definitely learned a lot. Thanks to the whole team behind me. I’m going to give it my all for the last round at Fox Raceway!”