Direct updates from round eight of the outdoor season in Lakewood.

As Lucas Oil Pro Motocross arrives at Thunder Valley for the penultimate round of the 2020 season, keep up to date on the action with direct updates through Racefeed. Qualifying earlier this morning was topped by Adam Cianciarulo (Monster Energy Kawasaki) in 450MX and Justin Cooper (Monster Energy Star Racing Yamaha) in 250MX. 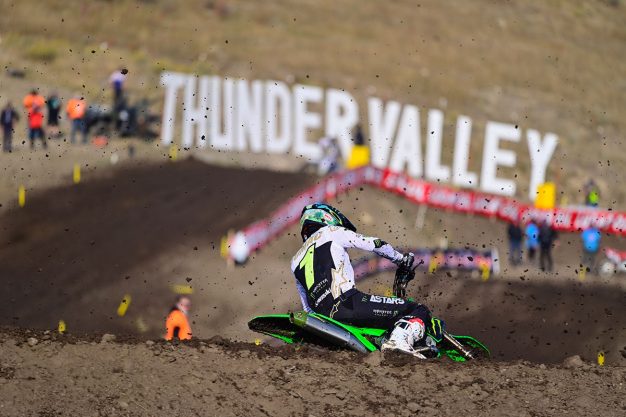 250MX moto one:
It was a dominant performance from points-leader Dylan Ferrandis in 250MX moto one, leading a Monster Energy Star Racing Yamaha sweep of the top three ahead of teammates Justin Cooper and Shane McElrath. The opening laps were led by a fast-starting McElrath until Ferrandis took control, going on to win by 5.390s, with top qualifier Cooper also moving by McElrath for the runner-up. Fourth was Jeremy Martin, who led a freight-train of Geico Hondas, followed by Hunter Lawrence, Jett Lawrence and fellow rookie Jo Shimoda. Completing the top 10 were Mitchell Harrison (Monster Energy Pro Circuit Kawasaki), Jarrett Frye (Monster Energy Star Racing Yamaha) and Dilan Schwartz (Bar X Chaparral Suzuki), who is back on track this weekend. Finishing 12th was a lowly result for Alex Martin (JGRMX Yoshimura Suzuki) after he went down during the moto, while RJ Hampshire (Rockstar Energy Husqvarna) crashed heavily mid-moto and was forced out with bike damage.

450MX moto one:
After qualifying on top of the charts, Adam Cianciarulo (Monster Energy Kawasaki) won moto one of 450MX this afternoon, jumping out front from the outset with his seventh holeshot in a row and going on to win by 2.620s. Training partner Chase Sexton (Team Honda HRC) was able to maintain pressure on his fellow rookie, but didn’t get close enough to attempt a pass, while defending champion Eli Tomac (Monster Energy Kawasaki) crossed the line third after a charge down the stretch. It was a relatively quiet race for red plate-holder Zach Osborne (Rockstar Energy Husqvarna) in a distant fourth, ahead of Justin Barcia (Monster Energy Yamaha). Next was Marvin Musquin (Red Bull KTM), from Christian Craig (Team Honda HRC), Blake Baggett (Rocky Mountain ATV/MC KTM WPS), Max Anstie (Twisted Tea HEP Motorsports Suzuki) and Broc Tickle (Monster Energy Yamaha). Non-finishers included Joey Savatgy (JGRMX Yoshimura Suzuki).

250MX moto two:
Victory in moto two sealed Cooper his first overall of the 2020 season, powering to the holeshot and then managing the lead from there. A mid-moto surge from Jeremy Martin wasn’t enough to overcome Cooper, who eventually won by 3.166s. It was a case of damage control for Ferrandis as encountered troubles in the beginning, going down and then clawing his way back to P3 and extending his advantage in the standings. Fourth was a season-best for Hunter Lawrence, from McElrath, Jett Lawrence, Hartranft, Shimoda, Harrison and Frye. Overall, Cooper won the round ahead of Ferrandis and Jeremy Martin, which means that Ferrandis will carry an 18-point lead into Fox Raceway’s title-deciding final round next Saturday.

450MX moto two:
The second moto was a convincing one for Tomac, charging to his first moto and overall win since Ironman in what is his home round of the season. It was Musquin who took the holeshot, before Cianciarulo quickly attacked and took his turn at the front with title rival Osborne in tow. However, Tomac made his way to the front of the pack by lap six and went on to win by 8.983s, handed the overall when a mistake from Cianciarulo allowed Osborne to go through for P2, which is how they would finish – Tomac ahead of Osborne and Cianciarulo. Clutch dramas slowed him in the middle stages, but they fixed themselves and he could ride away to the end. In fourth was Craig from teammate Sexton, followed by Anstie, Benny Bloss (KT Tape Husqvarna), a fading Musquin, Bogle and Jake Masterpool (Invictus Speed Crew Husqvarna) inside the top 10. Both Baggett and Savatgy sat out the second moto today. For the round, Tomac won ahead of Cianciarulo in a Kawasaki 1-2, with Osborne maintaining his points-lead by finishing third overall. Entering the Fox Raceway finals next Saturday, 10 October, Osborne holds a 24-point lead over Cianciarulo, with Musquin and Tomac still mathematically within reach with one round remaining.