Runner-up extends points-lead of Ferrandis heading into the finals. 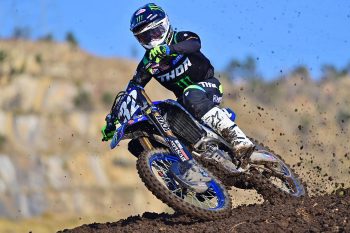 Monster Energy Star Racing Yamaha’s Justin Cooper has broken through for his first 250MX overall of the year in round eight of the 2020 Lucas Oil Pro Motocross Championship at Thunder Valley.

It was a dominant performance from points-leader Dylan Ferrandis in 250MX moto one, leading a Monster Energy Star Racing Yamaha sweep of the top three ahead of teammates Justin Cooper and Shane McElrath.

The opening laps were led by a fast-starting McElrath until Ferrandis took control, going on to win by 5.390s, with top qualifier Cooper also moving by McElrath for the runner-up. Fourth was Jeremy Martin, who led a freight-train of Geico Hondas, followed by Hunter Lawrence, Jett Lawrence and fellow rookie Jo Shimoda.

Finishing 12th was a lowly result for Alex Martin (JGRMX Yoshimura Suzuki) after he went down during the moto, while RJ Hampshire (Rockstar Energy Husqvarna) crashed heavily mid-moto and was forced out with bike damage.

Victory in moto two sealed Cooper his first overall of the 2020 season, powering to the holeshot and then managing the lead from there. A mid-moto surge from Jeremy Martin wasn’t enough to overcome Cooper, who eventually won by 3.166s.

It was a case of damage control for Ferrandis as encountered troubles in the beginning, going down and then clawing his way back to P3 and extending his advantage in the standings. Fourth was a season-best for Hunter Lawrence, from McElrath, Jett Lawrence, Hartranft, Shimoda, Harrison and Frye.

Overall, Cooper won the round ahead of Ferrandis and Jeremy Martin, which means that Ferrandis will carry an 18-point lead into Fox Raceway’s title-deciding final round next Saturday, 10 October.