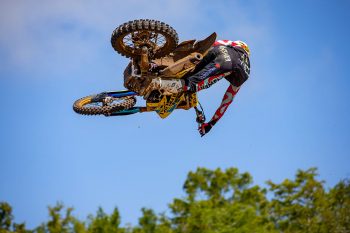 The battle to be top Suzuki is an important one, JGRMX Yoshimura Suzuki’s Fredrik Noren indicated after riding to a season-best result of eighth and edging teammate Joey Savatgy for position in Florida.

Noren benefited from testing with the team prior to round seven and, while he is constantly working to produce the strongest results possible, it was a positive to finish ahead of Savatgy with his 9-8 finishes.

“[Joey] is a very experienced guy, he’s raced for a long time and had some really good results, so it’s always a little confidence-booster beating guys who have had a lot of great results under their belt, put it that way.”

This year has also seen Max Anstie among the front-runners on occasion riding with the HEP Motorsports team aboard an Ohlins-equipped RM-Z450 and it was a rare occurrence last weekend to see all three of the Suzukis finish inside the top 10 overall. Anstie was the best of them in P7.

“Trying to watch the races afterwards, watching Anstie’s bike compared to mine or watching Joey’s bike and riding techniques, knowing that they’re on similar bikes or at least the same brand [helps],” he added. “It’s pretty cool to see three Suzukis in the top 10. I think it’s good for the brand that we’ve had some good results.”

In the standings it’s Savatgy who has the upper-hand in ninth position, eight points ahead of Anstie in 10th, while Noren is 12th entering Thunder Valley’s penultimate round of the series tomorrow.