Strong end to season the goal for Tickle on return

Influential couple of rounds coming up for factory Yamaha fill-in. 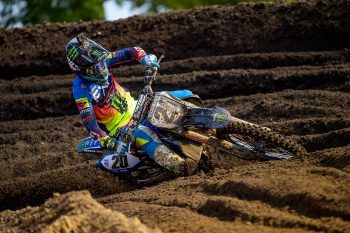 Finishing the Lucas Oil Pro Motocross season on a high could be influential for Broc Tickle as he works to secure his future on return in Lakewood.

Tickle’s time as fill-in rider at Monster Energy Yamaha will come to a close following the outdoors and it’s not expected he will be retained for 2021.

Instead, after showing glimpses of promise throughout the end of Monster Energy Supercross and during the 450MX series, the 30-year-old will be eager to put his hand up for next year by closing out the season strongly since recovering from the battering crash in Millville.

“I’m really looking forward to getting back to racing,” Tickle said. “I was just too sore last week to ride and I want to try and be the best I can be at these last two races.

“I’m not quite at 100 percent, but I know that I enjoy Colorado and I ride well there. I just want to get a couple of races under my belt before the season comes to an end. I’m looking to put in two solid results this weekend and pick up where I left off before Millville.”

Tickle is currently ranked 11th in the point-standings entering the penultimate round at Thunder Valley, his best result coming at Loretta Lynn’s 2 when he carded a 2-9 scorecard for an inspiring fourth overall.