Needing to set up 250 Class showdown following penultimate round. 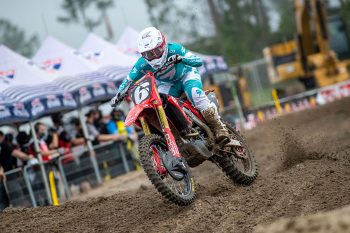 Making ground on red plate-holder Dylan Ferrandis in the race for the 250MX title in Colorado tomorrow will be vital if Jeremy Martin is to take the series down to the wire.

“Every race is important to put myself in a good position,” the 26-year-old said. “Obviously, I had a nine-point swing over Dylan at Millville and he brought it back, so anything can happen in a weekend – the 250 Class is very competitive.

“Some guys are finding more speed here later in the season, including my teammate Jett [Lawrence], Justin Cooper is getting a little faster and sharper too. Just try to do what I can and get better starts than what I’ve been getting and fight for it.”

With media questioning whether team orders from either Geico Honda or Star Racing Yamaha will come into play as the season winds down, Martin doesn’t suspect team tactics will have any effect on the outcome of the championship.

“I don’t know about that,” commented Martin, who won both of his 250MX championships with Star in 2014 and 2015. “Obviously, Dylan went 1-1 last weekend at Millville and then he went 1-1 this weekend. There’s no team orders on my side.