Exciting young prospects to remain on YZ250Fs through 2022 season. 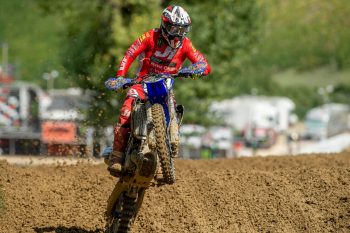 French talent Maxime Renaux has been promoted into the Monster Energy Yamaha Factory MX2 team alongside Jago Geerts from next year, both signing through the 2022 season.

Renaux, 20, has long been a Yamaha rider, winning the 125cc Junior World Championship in 2015 and scoring multiple EMX125 victories in 2015.

His first full season in MX2 was last year, finishing seventh in the championship with a podium at Imola as part of the SM Action M.C. Migliori Yamaha organisation that he is currently riding for.

“I’m really looking forward to moving up to the Monster Energy Yamaha Factory team for 2021 and 2022,” said Renaux, who replaces Ben Watson. “It will be a new beginning for me and I’m ready to fight for the title during those next years.

“The team looks really motivated and so am I. I am already really looking forward to starting our winter program and to start testing and training ahead of 2021.”

Geerts made his MX2 debut with the team back in 2018, the 20-year-old Belgian going on to finish third in the world championship in 2019.

This year Geerts won his first-career grand prix at the season-opening British GP, also going on to stand atop the podium at two of the Latvian rounds. He has a total of 13-career podiums.

“I’m really happy to sign with Yamaha for another two years,” commented Geerts. “The last three years were really nice and it’s really cool I have extended my contract.

“Everything works nicely within our team and we have had some really good races this year. I’m really happy with my bike, the Yamaha YZ250FM, so it’s good for me to stay with Yamaha for another two-years.”