Frenchman ready to take that next step in his credentialed career. 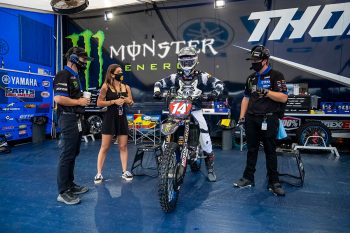 Current 250MX leader Dylan Ferrandis is in the form of his career as he prepares to step up to the premier class in 2021, on target to make it double championships this season.

Ferrandis made it back-to-back 250SX West crowns in Monster Energy Supercross earlier this year and is now in control of the Lucas Oil Pro Motocross Championship.

The Frenchman initially joined Monster Energy Star Racing Yamaha in 2017 following a career in the MX2 World Championship, winning multiple GPs prior to moving to the US.

Since then he has become one of the most sought-after riders in the sport with his success at Star Yamaha and – although not yet made official – he is almost certain to remain at the team when moving up to the YZ450F next year. He attributes his success to the people in his corner, including respected countryman David Vuillemin.

“I think I’ve progressed a lot [since moving to America], but I think I would’ve progressed the same if I did stay in Europe because of just the experience, the learning and everything,” the 26-year-old explained after sweeping WW Ranch.

“It’s more the people that I met in the US, the people I work with and what they helped me to achieve, I think I was really lucky to find the right person and yeah…

“I guess it would be the same in Europe, but for sure, like today, my experience in Europe riding sand tracks was definitely a big help because even if the track was not that much sand, the technique was pretty similar and I think it helped me a lot today.”

With seven moto victories to his credit, including the last four in succession, Ferrandis is in the box-seat to claim his first outdoor championship with two rounds remaining, 13 points ahead of Jeremy Martin entering Colorado.

It’s widely understood that the Monster Energy Star Racing Yamaha team will become the brand’s factory 450 program from next year, indicating an end to the internal Monster Energy Yamaha team. Ferrandis and already-contracted Aaron Plessinger will be YZ450F-equipped.