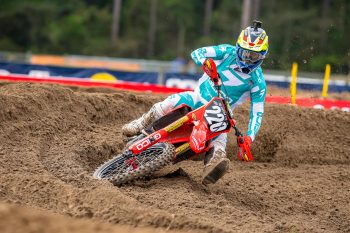 “So the first time I’ve ever been to WW Ranch and the track was pretty fun,” said Martin. “I knew it was going to be high-speed, but dang it, man. I didn’t realize it would be that high-speed! Just a 3-3 day for me for third overall, so nothing fancy. Definitely Dylan [Ferrandis] was riding really well today. He got really good starts both motos. He was out of the gate better than me. So I did what I could. I was kind of fighting it all day today, but I did everything that I could. We have two rounds left, so we’ll hopefully fight it in to the end here and see what happens.”

Jett Lawrence’s quest for a first career overall podium has grown frustrating, with 5-6-6-4-4 finishes in the last five races. He’s also scored first-moto podiums in three-straight races, punctuated by an impressive runner-up ride Saturday at WW Ranch. Just like last week’s race in Minnesota, however, he suffered from a terrible start in moto 2. He ended up sixth, and his 2-5 scores landed him in fourth overall.

Lawrence could only sum up his day only like this: “I’m sick of getting fourth place.”

Shimoda is quietly building his own consistent run with back-to-back eighths, this time with 8-10 moto scores.

“Yeah qualifying [session] 1 on a new track for me, it just was hard to do a good lap time. I wasn’t fast enough. In qualifying 2 I found good lines and and more intensity finished p6 in that group, but p9 overall,” explained Shimoda. “In Moto 1 I picked a gate really far outside and it didn’t work. Pretty much dead last to 8th. Heat 2 again bad start and it was really hot, it was a tough race. I could only manage 10th for eighth overall.”

“My weekend was pretty good, but qualifying was not good once again,” said Mumford. “It is hard to show up to a place I’ve never rode before and pin it, but I need to work on that. Races were good, I’m really happy with my fitness. I passed three people the last three laps of the first moto and got 10th and second moto was around 10th and crashed and charged hard to the end and passed for 11th on the last lap. The heat didn’t bother me as much as I thought it would until about four laps to go in the second moto. Then it hit me, but I was close to passing for 11th so I pushed harder than I ever have and luckily I made it happen.”

Hunter Lawrence was looking forward to a good day, but a freak mechanical problem in Moto 2 ended his bid.

“Yeah mate, tough weekend in the Florida heat, riding in the first moto I felt wasn’t bad, a lot of positives,” he said.

“Coming through the pack to sixth, closing in on Alex Martin, I was really looking forward to the second moto because I knew my fitness was good and a lot of guys were suffering. Unfortunately we had an engine malfunction with the flux capacitor that resulted in a DNF on lap 3 or 4,” added Lawrence with his usual humor. “Oh well. We’re healthy and fit leaving thankfully and looking forward to next weekend.”

Two rounds remain in the 2020 season, with Colorado’s Thunder Valley and California’s Fox Raceway looming over the next two weekends.