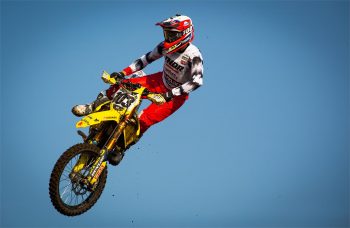 Alex Martin and his JGRMX Yoshimura Suzuki Racing RM-Z250 fought his way into the top three in the Lucas Oil Pro Motocross Championship point standings at round seven in Jacksonville, Florida at the weekend.

Other JGRMX riders Fredrik Noren and Joey Savatgy battled up front at the WW Ranch National to earn top-10 moto and overall finishes and Twisted Tea H.E.P. Motorsports’ Max Anstie used a brilliant second moto ride aboard his RM-Z450 to earn top-five moto points, good for a top-10 overall and a jump into the top-10 in the 450 class points as Suzuki wrapped-up the day with more racers inside the top-10 than any other brand.

In moto one of the 250 class Martin converted a solid start into a steady march forward, using his RM-Z250’s balance and strength to power past other racers and into a top-five finish. After that “A-Mart” wanted more; he jumped into the lead down the start straight of moto two and was second at the official holeshot line. About 10 minutes into the 30-minute plus two lap moto, Martin collided with another racer. The racing incident put Martin on the ground. Undaunted, he charged back through the pack, earning a hard-fought seventh position at the checkered flag.

Said Martin: “It was a so-so day at the Florida national. The heat and humidity made the conditions pretty tough, and a second moto crash with my brother cost me a shot at another podium. Moving to third in points was a positive.”

Both 450cc motos also saw more Suzuki riders inside the top-10 at the holeshot stripe than any other brand. Twisted Tea H.E.P. Motorsports’ Max Anstie was one of those riders in moto one, but a first lap mistake dropped him back to 40th place. Anstie, a sand specialist racing in the US after several years on the MXGP circuit, passed over 25 riders in the soft Florida soil to put his RM-Z450 inside the top 15. In the second moto, “Mad Max” turned another great start into moto-long battles inside the top five; the two finishes earned him a top-10 overall.

“I’m making progress each week with myself, the bike, and the team. I’m happy with a solid fourth in the second moto. It was nice to battle up near the front.” Anstie explained his problems in the first race. “On the first lap of moto one I went off the track and had to make a hard charge from a long way back, so it was nice to end up seventh overall. I’m looking forward to Colorado!”

Noren and Savatgy crossed 450 moto one’s holeshot line wheel to wheel. “Fast Freddie” rode strong in the hot and humid Florida weather for a top-10 finish. His moto two start was a little further back but worked his way up a couple positions from there. His moto scores netted him a top-10 finish at the event and moved him up one position in the title points.

Said Noren: “It was a good weekend for me. We did some testing this week. Riding down in Florida with Alex was good; that definitely put us in a good direction. With just two more rounds to go I’m looking forward to finishing off the season strong.”

Savatgy also started both motos securely inside the top 10 and fought attacks throughout both races to defend his position up front. “Versace” ended the day’s racing in a battle with his teammate. The points from the Florida round advanced Savatgy one position in the season standings.

Said Savatgy: “It was another struggle weekend for me. We have two rounds left for me to dig deep and finish strong.”

“Overall it was a solid day: All three riders in the top 10.” Jeremy Albrecht, the JGRMX Team Manager explained further. “Everyone tried hard and fought the whole moto to finish the best they could. We will make a few small changes to try and finish out these last two races even stronger. It’s really close to being a truly great day for all.”

Only two rounds remain in the abbreviated nine-round 2020 Lucas Oil Pro Motocross series. The final battles take place in Colorado and California over the next two Saturdays. Both Suzuki teams look forward to more strong starts, top finishes, and even more improvements in the Championship points standings.