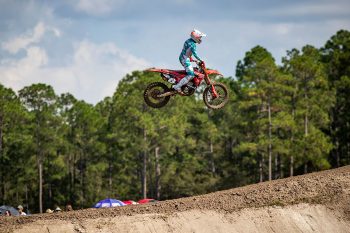 Jeremy was putting a move on Alex for fourth position on lap five at the end of the rollers when the pair came together, resulting in the latter going down.

While Jeremy was able to press on for third in the moto and overall, Alex had to collect himself once remounting in 10th place and managed to climb back to seventh by the end of the race. He was sixth overall for the weekend.

“So, I actually just had dinner with Alex tonight and his wife Kelsey, so we were talking about it at dinner and I was like, ‘dang it, man’,” Jeremy explained. “I said, ‘dude, like I was trying to get you, you know’.

“He had the inside and he was bulldogging it, I just sent it in there and I was like, ‘I didn’t think you were gonna give it to me’, so I came in and I still went for it and I high-sided.

“He’s like, ‘yeah dude, you took me out!’ and I was like, ‘dude, I just didn’t think you were gonna… you weren’t making it easy, that’s for dang sure’. So, he went down and we kind of just laughed about it.

“He was like, ‘yeah, I got back up and it was just gnarly in the back of the pack, back there’. He was like, ‘it took me a full lap just to recover’. When it’s hot like that, if you do go down, you kind of feel like, ‘oh, man’ and you take a little bit of a break – you’ve gotta get back into that mode.”

Alex also touched on the subject in the Suzuki report: “”It was a so-so day at the Florida national. A second moto crash with my brother cost me a shot at another podium… moving to third in points was a positive.”

Following WW Ranch, Alex Martin has now been elevated to third in the Lucas Oil Pro Motocross Championship in the 250 Class, with Jeremy still in the title fight despite losing ground on Dylan Ferrandis at Jacksonville.