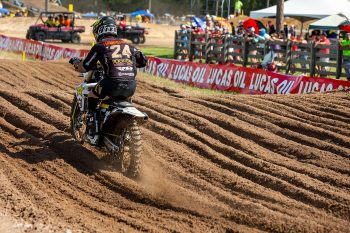 RJ Hampshire’s 250 Class prospects faded with a non-finish in moto one at WW Ranch after being ejected from his factory Husqvarna mid-air, badly damaging the bike, but avoiding injury in the scary impact.

Hampshire was running third in the closing laps when he was kicked over the front, opting to dismount and confessing that the incident was definitely a scary one.

Rockstar Energy Husqvarna later confirmed that he wasn’t hurt in the fall, but he is still not 100 percent after injuring his hip at Spring Creek. Remarkably, Hampshire rebounded to score sixth in moto two and 12th overall.

“Today was tough,” Hampshire said. “I was coming in injured and I didn’t ride all week, so I tightened up in the first moto. I was able to put a late-race charge, but I caught a rock off the biggest jump out there and it really scared me.

“I’m lucky enough to walk away with pretty much minor aches and pains, but I’m sure I’ll be feeling it later. I salvaged what I could in the second moto and I’m ready to re-group and get back on the box next weekend.”

Hampshire entered the Jacksonville round third in the 250MX standings, but dropped to fifth behind Alex Martin and Shane McElrath in the battle for P3 in the championship standings heading into the Thunder Valley national.